Co-op Slayer points are points obtained when completing a Slayer assignment via Social Slayer. These points unlock exclusive rewards bought from Slayer Masters; such as pets and abilities like healing your partner with food and share potion effects. A maximum of 1,000 co-op Slayer points can be held at one time.

To receive co-op Slayer points, players can invite each other by using the ring of slaying, a full slayer helmet with rings of slaying fused to it, or an enchanted gem targeting on the partner. Note that both players MUST be on the same assignment or both must have no assignment at all. Both players must have Accept Aid turned ON.

The points are obtained when the Slayer assignment is completed by both players. The amount received depends on the Slayer Master used: 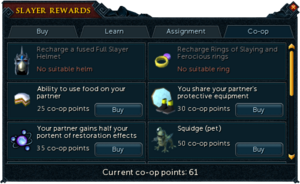