The official world for Party Room is world 9 (P2P). 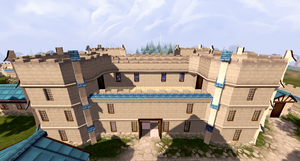 The Party room, also known as the Falador Party Room, is a building in north-east Falador. It is used to host drop parties where items, regardless of value, can be indirectly given to other players. These items drop randomly from party balloons, which players have to pop, in order for the items to appear on the ground.

The owner of the party room, Party Pete is a fun-loving non-player character, and one of the few characters in RuneScape who wears a partyhat. Although he wears a partyhat, it is generally thought that this is because of his name and role, not his wealth. He will use the dance emote, and count down until the release of the party balloons. He will also remove 'cheap' items from the Party Chest. He also sells Afros in his emporium. When they were removed as drops, he also began to sell 10th anniversary candles (15 coins) and 10th anniversary cakes (150 coins).

Talking to Party Pete is one of the easy Falador achievements. 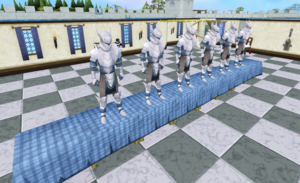 Dancing knights of the Party Room.

Pulling the lever near the Party Chest will give a player the option of summoning the 6 Dancing Knights for 500 coins. The knights will dance on the tabletop, singing a song in parody of a similar scene in Monty Python and the Holy Grail. 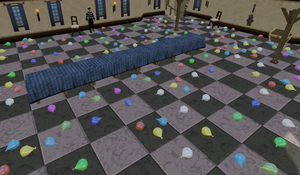 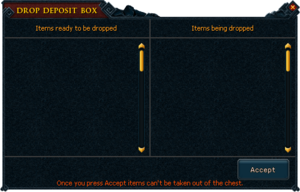 Items waiting to be dropped.

Players can donate items to the party chest, but cannot withdraw them again. Items that cannot be dropped or traded may not be put into the chest. Pulling the lever next to the chest for 1000 coins will cause balloons to float down around the hall. Popping these balloons may yield an item from the chest. If stacked or noted items are put into the chest, they do not necessarily have to appear in the same balloon. As an example, twenty noted lobsters put into the chest can appear in four different balloons, with random amounts in each whose sum is twenty. POF animals are reclaimed directly to the player's inventory rather than spawn on the ground. This feature, and the bar upstairs, makes the party hall a popular place for drop parties. There is also a chance of receiving one of four pets from popping the balloons, the Balloon cat, the Balloon dog, the Balloon sheep, and the Balloon goat follower pets. These appear to drop in that order but the number of balloons needed to pop in order to get them is random.

Upstairs in the Bar.

The bar upstairs serves regular beer. Players can also dance with the barmaids Megan and Lucy.

Postie Pete frequently visits the party hall. He does not trade any items, mostly just tells jokes. Players can converse with him one at a time.

﻿On 4 January 2011, it was made possible for Jagex Moderators to drop a 10th anniversary chest anywhere on RuneScape, making it possible to have a balloon drop party wherever you wanted. Players can drop anything they want, and a moderator will drop the 10th anniversary cakes and candles. This was to celebrate RuneScape's 10th Anniversary.

Bankers counting down to the next big drop.

From 17 March 2009 to 1 February 2011 certain NPCs would announce that a party was about to take place. This was to stop players from making covert trades (especially real trades) by attracting lots of people into the room to take the items. The party advertisement varied depending on the value of the items in the chest:

The NPCs in Falador, such as the bank staff and the guards, react with excitement when a party is in progress. One of the phrases said refers to "high value items", but it is hard to tell if that is true.

The NPC chat only appears on the main screen, not in the chat box. 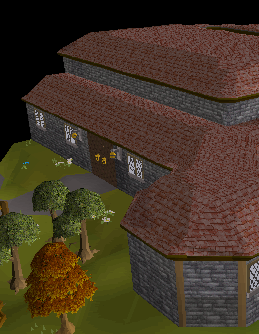