The 21st Anniversary celebrations are an event marking 21 years of RuneScape, celebrations first began on 4 January 2022 with balloon drops. 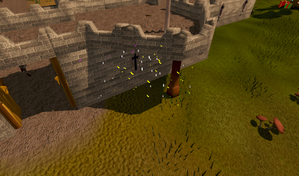 Every 30 minutes purple, silver, and yellow balloons dropped near all lodestones, except in Prifddinas. The following message occurred two minutes before the balloon drop in the player's chatbox: Party Pete is going to drop balloons near all of the lodestones (except Prifddinas), in two minutes, as part of the 21st Anniversary celebrations. After this message a confetti effect was seen around the affected lodestones until the balloons dropped.

This information has been compiled as part of the update history project. Some updates may not be included - see here for how to help out!
Retrieved from ‘https://runescape.wiki/w/21st_Anniversary_celebrations?oldid=35744132’
Categories:
Hidden categories: