From the RuneScape Wiki, the wiki for all things RuneScape
Jump to navigation Jump to search
Wikipedia also has an article on: wikipedia:Diamond Jubilee of Elizabeth II

The Diamond Jubilee was a street party in Varrock prepared for Queen Elizabeth II that began on 29 May 2012 and ended on 13 June 2012. In celebration, Varrock square had been filled with tables for a Jubilee feast, special commemorative stalls and Jubilee themed decorations.

A number of visitors arrived in Varrock to mark the event, including characters such as Big Ben, Essjay, and Will Shakenspear. In addition, extra guards of Varrock were stationed around the city, along with special royal guards, to ensure everything was safe. Most bankers were on holiday, and their posts were being manned by the royal guards, giving them a well earned break.

There were a few special activities for players to take part in as part of the event, such as a search for lost corgis and a Cryptic Clue Fest. Players taking part in these received special Jubilee themed prizes. 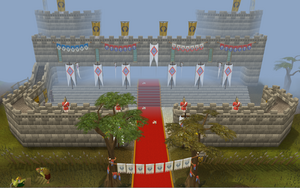 The Castle decorated for the Jubilee.

Various new NPCs are in Varrock during the celebrations:

A number of notable characters from around RuneScape are in town for the Queen's visit:

Minnie Coop has lost some of her corgi dogs and needs your help to find them. The dogs will be scattered around Gielinor. By helping finding her dogs, you will get a cute little corgi as a pet permanently (you can also take them for a short walk in Varrock without doing Minnie's corgi hunt).

The locations of the dogs are:

For extended information on the locations, see the Minnie Coop article.

The Queen is soon to arrive but the procession is still not ready for the occasion. Big Ben, in charge of the procession, and his assistant, Essjay, need the player's help to make sure that all is ready in time. Essjay will give the player instructions in the form of the fourth Cryptic Clue Fest. The clue fest started on 1 June, with clues being revealed on a thread of the RuneScape Official Forums.

Exotic Foods, the stall owned by Bang Ersenmash and found on the east side of the square, sells a number of exclusive British-themed foods: cream teas, coronation chicken sandwiches, fish 'n' chips, steak and kidney pies and full breakfasts.