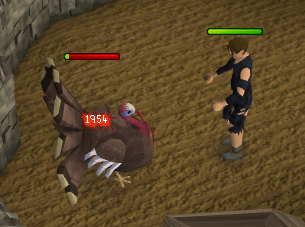 A player hitting very high without equipment during the 2010 event

The 2009 and 2010 Thanksgiving event was a holiday event that was used in both 2009 and 2010. Both events were exactly the same. It was released on 23 November 2009 and again on 24 November 2010 for both members and non-members. The event was silently released, being added in-game and to the Knowledge Base without being announced on the homepage.[1] The requirements or rewards were never fully revealed to the player at the time of release. This is contrary to most other Holiday quests. The event may only be completed once. So if a player finished it in 2009, they could not repeat it in 2010; the cook's brother will simply thank the player for the previous year's help.

This Holiday event is unique in the fact that it's revealed to players in 5 parts.

To start the event, talk to the Cook's Brother in the Lumbridge Castle kitchen. He explains that the cooks have been feeding special food to the turkeys to make them lean and more tasty, but this has made them stronger and more aggressive, and the turkeys have now formed an army to resist being roasted. 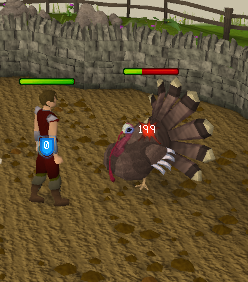 The Cook's Brother shall then, if the player wishes, teleport the player to a previously unused field north of Lumbridge, next to the Windmill. The Cook's Brother then hands the player the Fabled Gravy of Turkey Slaying (which he claims came from the "Gravy Boat of Saradomin"), which he was hoping to save for the supposed "turkey apocalypse", which is possibly occurring now.

Once inside the field, ten level 138 Turkeys will need to be killed. Due to the effects of the fabled gravy, players can hit up to 1990 damage (without a Special Attack) on the turkeys and almost never take damage, regardless of stats or equipment. No experience is given for damaging the turkeys, unless you are using Magic. The burial of bones will give Prayer experience.

Once the turkeys have been defeated, the player will be returned to Lumbridge Castle kitchen, where the Cook's Brother will thank them for saving Thanksgiving, and players who have not yet unlocked the Give Thanks emote will unlock it. If they have unlocked the emote already, they will only receive a message that reads, "Your heroic efforts in battle against the turkeys have made you feel at-one with your inner turkey. Congratulations!"

A player performing Give Thanks emote

There was also a Cryptic Clue Fest, a special clue-seeker event that was held around Thanksgiving weekend on both the forums and in-game. This event ran from 26 November 2009 until the next week. Every day, two new clues were released:

An NPC clue, telling which NPC players needed to talk to; the NPC clues were revealed by the NPCs that take part in the event (Lachtopher, for example).

An item clue, telling which items players needed to bring to the NPC; the item clues were released on the official RuneScape forums by Jagex Moderators.

For the Turkey Thanksgiving event:

For the Cryptic Clue Fest: