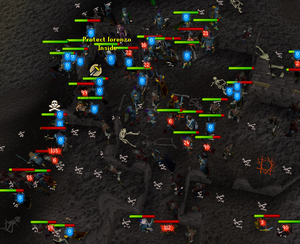 The Zombie Outbreak was an official event released by Jagex with the Reports of Strange Activity at Clan Wars update.[1] The event started on the 25 October and ended on 31 October 2010. It was on at the same time as the 2010 Hallowe'en event.

During the event, zombies and "Infected Jagex Moderators" randomly appeared in the Clan Wars free-for-all portal. The event was on all worlds. As the event progressed, more and more Jagex Moderators became "infected" which increased the amount of zombies in each wave outbreak.[1]

A program was created by Jagex called Alpha Base Program.[2] Three Alpha Base Program gatherings were held over the duration of the event. At each gathering players could join together with the surviving Jagex Moderators and fellow zombie hunters to learn zombie survival techniques, as well as go hunting with a larger group.

The three gatherings were on:

All Alpha Bases were held at the Jolly Boar Inn in world 30.

In the event the player can do 3 tasks:

Many players were hunting the zombies in the hopes of killing a Jagex Moderator or just for the fun of it. The most commonly taken approach was to join one of the 20 Jagex Clan Chats. This made finding the outbreaks much easier as a Jagex Moderator popped in every now and then to warn players of an incoming attack, giving them time to prepare. Each chat was maintained by a player Moderator.