From the RuneScape Wiki, the wiki for all things RuneScape
Jump to navigation Jump to search
Not to be confused with Siege of Falador or Battle of North Falador.
Loading...
Holiday EventBattle info

The Invasion of Falador was a two-week event that was released along with the Falador Graphical rework on 19 October 2015 in which the Zamorakian Black Knights stage an invasion of Saradominist Falador under White Knights control, in search for the lost sword of King Raddallin and the Banner of Raddallin. This event ended in a victory for the White Knights, with 78% of all participants siding with them.

There was a daily cap of 2,500 commendations. This was increased to 5,000 for 1 and 2 November, the last two days of the event. Further experience could not be earned for that day after reaching the cap. There were various ways to earn commendations, including:

In addition, whilst the event was in effect:

Two minutes after both Knight Champions were defeated, black and white balloons were dropped all around Falador. They could be burst to receive commendations. This was signaled by a chatbox message of " Party Pete has dropped balloons in the city of Falador. Support the White or Black Knights by bursting balloons.". If the Champions were not defeated by the time the next champion spawned, the original champions would disappear and respawn with full health and the balloons would not drop until they were killed.

Players could fight white or black knights to earn combat experience and commendations. The knights had 10,000 life points, used abilities and scaled to the players level, and thus should not be underestimated. Combat experience could be turned off by selecting the configure option on commendation.

Before the balloons dropped, every thirty minutes at :00 and :30 game time, one White and Black Knight champion spawned in Falador, signaled in the chatbox by Champions of the Kinshra and White Knights have arrived in Falador.. They were significantly tougher than normal knights, with 85,000 life points, and awarded over 100 commendations. 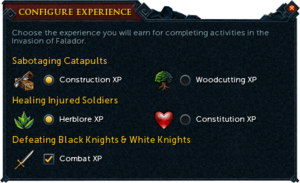 The configuration interface for experience.

Injured knights could be found in the Kinshra and White Knight camps, locations shown above. Healing them earned commendations, and either Herblore or Constitution experience, which could be toggled by talking to a Nurse, or choosing in the commendation configure interface. 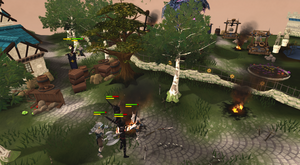 Falador during the invasion.

Catapults could be found in the northern Kinshra camp, south of Falador, Falador Park, and the eastern Falador square. Sabotaging them earned commendations, and either Construction or Woodcutting experience, which could also be chosen in the commendation configure interface. 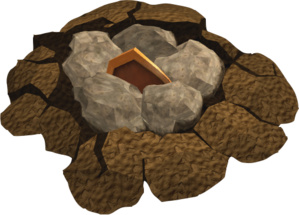 In the east side of Falador Park, there was an activity that players could use tools to earn rewards for, including:

The mystery boxes contained a variety of rewards that have previously appeared, or do appear, in Treasure Hunter.

A miniquest could be completed to permanently unlock the experience boost gained from the battle horn "charge" bonus, and receive the Banner of Farradorn cosmetic override (or when already unlocked with the banner fragments, the blessed banner of Farradorn). To start the miniquest the research notes had to be obtained from a supply cache or by skilling. The order of NPCs to talk to was as follows:

After speaking to the NPCs head down to the dwarven mines. In the central room, south of the small summoning obelisk, there was a glowing rock. The rock could be clicked on it to reveal the Spirit of Farradorn and claim your reward.

Commendations were the main reward for the event. Every 100 commendations could be converted into a supply cache, which gave out:

The results of the event were not revealed during the event, with the stated intent of not biasing the outcome, as previous events of a similar style saw players joining the winning team.

Since one of the spawn points of the black knights was directly east of the Falador lodestone, the results in favour of the white knights are unsurprising due to their geographical convenience, said a JMod on the livestream that announced the results. Future repercussions of this outcome were not mentioned.