From the RuneScape Wiki, the wiki for all things RuneScape
Jump to navigation Jump to search
Loading...
Holiday EventBattle info

The Port Sarim Invasion is an event that was released on 11 July 2016 and lasted for two weeks. The event was open to free-to-play players and had no requirements. The event continued The Eastern Mystery story line from Meg's cases - with the return of Jed and a stolen ship. The event featured an introduction to the upcoming Arc region with the Impressing the Locals tale (first part of Tales of the Arc) which remains in the game permanently after the event was removed.[1]

The event is started by talking to Seasinger Jemi in Burthorpe or Guard Captain Roarkwin next to the Port Sarim lodestone. Either gives the player 200 tokens, which do not contribute towards the token's daily cap. Players can use their tokens to configure what experience they receive from the various activities. There is also a portal leading to Port Sarim next to Seasinger Jemi in Burthorpe. The holiday portal in Prifddinas can also be used to enter the area. 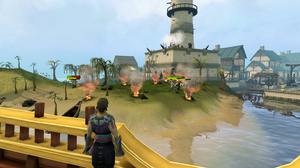 In order to earn tokens, players can defend Port Sarim from volleys of cannonballs from the kidnappers' ship through a variety of activities. The majority of these activities take place on the roof of the Port Sarim Jail.

Players can mix black powder for Herblore experience, operate the cannon for Firemaking or Ranged experience, repair the damaged wall for Crafting or Construction experience, and smith cannonballs at the furnace for Smithing experience. Right click the tokens to select which skills get experience. Landing parties of pirates can also be fought in fights which are scaled to the player's combat level. Deaths in those fights are not safe. Combat experience can be toggled on or off through tokens. The pirates that appear are Skulls bosun, press-ganger and scout.

Every 30 minutes (on the hour and half past) two champions spawn to fight: Bennett (guard champion) and Hein (Skulls champion). Hein can be fought for a token.

The experience gained from the activities varies by skill level. At level 99 in the respective skill, the following experience is obtained for every successful action:

These rates can be boosted by 25% for 3 minutes with 'Conch!' buff obtained by blowing a conch shell. Bonus experience is also applied.

There is a daily cap on experience gains in the activities based on obtaining tokens. The original cap of 2,000 tokens was intended to take around one hour to reach each day. On 23 July, the cap was increased to 4,000 tokens, taking around two hours to reach. Every 200 tokens can be converted into a supply cache which may be opened for a variety of rewards, including cosmetic rewards and experience lamps unique to this event. 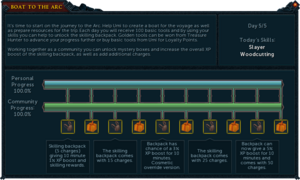 The event was released on 14 July 2016 involving building a ship to travel to The Arc. It is similar to the Lost sword of King Raddallin and Heart of Gielinor: Encampment events; players earned experience from participating with the daily 100 basic tools and gain golden tools from Treasure Hunter to increase the experience gained. More basic tools can also be bought from Seasinger Umi using Loyalty Points. A maximum of 10 each of the tool sets can be bought from Seasinger Umi. Ironmen can not buy these extra tools.

The ship that is built is named Sarim's Revenge.

Rewards include up to 6 small mystery boxes and a skilling backpack. When training, you will also get tokens which count towards the 4,000 daily cap. If you prefer to get the maximum XP from the event, particularly for expensive skills, it is recommended that you do the Invasion of Port Sarim (as Boat to the Arc only requires tools and can be done even if you have reached the token cap). Both your personal progress and the community progress must have reached certain thresholds to receive the rewards. 5 small mystery boxes can be reached by both your personal and community progress and 1 small mystery box will be given to you when your personal progress reaches 100%.

The experience gained from the activities varies by level. The following table lists experience per action that is granted with basic tools while having level 99 in the respective skill.