Awesome April is a series of events that take place over the course of April and May 2021. All events start on Monday after the game update and last until the game update on the next Monday. Unlike the Grand Party this is not limited to just the Lumbridge Crater and as such the activities there have not returned. 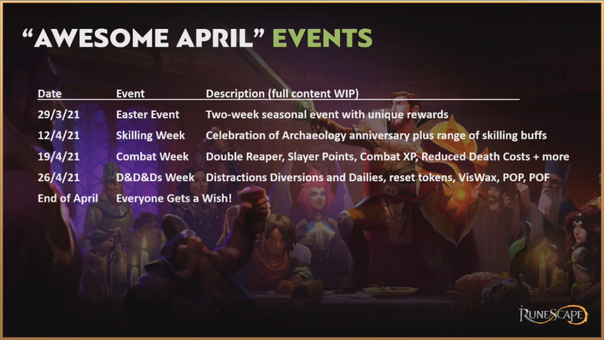 Players get 50% increased experience in all gathering skills:

Players also get a 50% bonus to precision while working on Archaeology.

Ironmen do not benefit from any bonuses.

This information has been compiled as part of the update history project. Some updates may not be included - see here for how to help out!
Retrieved from ‘https://runescape.wiki/w/Awesome_April?oldid=35723580’
Categories:
Hidden category: