From the RuneScape Wiki, the wiki for all things RuneScape
Jump to navigation Jump to search
For the summoning familiar, see Giant chinchompa.
For the achievement, see Big Chinchompa (achievement).

The D&D awards Hunter experience as well as competence points that can be spent on additional experience, a handful of Hunter-related items, or access to instanced private hunting areas.

Different soporith moths have different Hunter requirements to catch. Additionally, one of the several locations in which the D&D can start is Isafdar, which requires the player to have begun Regicide to access.

The location of the orange portal in the Gnome Stronghold.

Once every hour, at half past the hour, Nyriki Tapio will emerge from the ground at one of the various Hunter areas across Gielinor. Players can enter a Big Chinchompa game by climbing down the hole he leaves in the ground. For several minutes before his arrival, the ground will frequently rumble and the screen will shake slightly. This will be accompanied by the chat message: You hear a disturbance from below.

While players can track down Nyriki on their own, it is far faster to take his portal at his and Meiliki's house in the Tree Gnome Stronghold, directly south of the Gnome Agility Course. The portal tells players where he will next appear, as well as how long until he appears, and it can be used three times per day as a direct teleport to his next location.

To quickly learn when the next game will begin, players can use the D&D tracker, or speak to Mieliki via the NPC Contact spell. Alternatively, it is simple to remember that a Big Chinchompa game will always start at the half past every hour.

Big Chinchompa takes place in a large cavern, in the middle of which is the nest of a large plutonial chinchompa. The objective of the game is to catch soporith moths and feed them to the chinchompa in order to put it to sleep. A game of Big Chinchompa lasts 20 minutes, or until the chinchompa eats enough moths and falls asleep. Players can join a game that is already in progress, but can only join two games per day.

Growing around the lair are a large number of small trees. Soporith moths will frequently hatch from cocoons that hang on the branches of the trees. Players can either catch moths directly from the air, or click on shaking trees to catch them as they hatch. Moths can be caught barehanded and stored in the moth jar that Nyriki will hand players at the start of a game. The jar holds up to 15 moths, and once full, it must be emptied into the chinchompa's nest; this awards Hunter experience and competence points for each moth caught, and increases the chinchompa's drowsiness. A bar on the left side of the minigame interface measures the current drowsiness level, and once it fills to 100%, the chinchompa falls asleep and the game ends. If a player still has moths in their jar when the game ends, they are awarded experience and points for them as normal.

Protea flowers grow at each corner of the lair. These flowers attract soporith moths when wielded by players. With a protea flower equipped, players will occasionally attract the highest-level moth they can catch and automatically attempt to capture it, though success is not guaranteed.

A game of Big Chinchompa takes place on a world that is dedicated to it. Players from different worlds will all play together in a single game. Soporith moths and shaking trees are instanced, so there is no player-to-player competition for moths. However, if there are many players playing the game, the bar will likely fill faster thus making it somewhat harder to get the maximum 1500 points before the bar is full.

The overview seen ingame. This Big Chinchompa is almost asleep (99%).

With at least 78 Hunter to catch grey soporith moths, players can gain up to around 33,000 experience each game, which usually takes between 15~20 minutes. 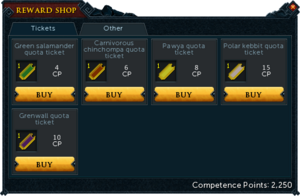 Feeding moths to the chinchompa awards players with competence points that may be spent on various rewards. Up to 1,500 points may be earned per game, and players may hold up to 20,000 points at once before needing to spend some in order to earn any more. Players can obtain rewards from Nyriki after a game is completed, or from Mieliki at any time. Players can only have 30,000 of one quota hunter ticket. Afterwards, they must use them in order to buy more. If players leave the game early after getting the max 1,500 points earn in a game, they will still receive the points once the game finishes despite not being in the area.

Players can exchange competence points for tickets that allow them to catch a number of Hunter creatures in Nyriki's private hunting grounds. One ticket is consumed when a creature is caught. The private hunting grounds are accessible in Nyriki and Mieliki's house in the Tree Gnome Stronghold, near Nyriki's portal. It is possible to invite other players into an instance so long as those players possess at least one ticket for the area. It is possible to enter the private hunting portal to find another player utilising the hunting area. There is no need to switch worlds looking for an empty private hunting area; just step out of the portal and back in and you will be in your own private instance. (This may take more than one try to get your private hunt area.)

The private hunting areas include: