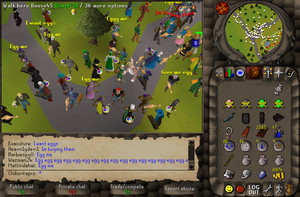 Players participating in the 2005 Easter event.

The 2005 Easter event began on 21 March and lasted for two weeks. During this time, the Easter Bunny appeared. The Bunny gave players a basket of eggs to hand out to other players. After giving out the eggs, the player's reward was a rubber chicken.

When given an egg, the player could eat it and automatically do the chicken dance without the rubber chicken. All the eggs were non-tradeable and melted after the event.

When wielded as a weapon, the rubber chicken can be used to whack people. Players can dance like a chicken by choosing the "dance" option (or "operate" option when wielding it).

Also, while holding the rubber chicken, if you did the flap emote your player would rise slightly off the ground.

Players whacking each other with the Rubber chicken.

This information has been compiled as part of the update history project. Some updates may not be included - see here for how to help out!
Retrieved from ‘https://runescape.wiki/w/2005_Easter_event?oldid=35637564’
Categories:
Hidden category: