A Snow Imp teleporting a Player to the Land of Snow

). Snow also fell from the Land of Snow, which players could go to by asking the Snow Imps to take them there.

Players could pick snow up and wield the resultant snowballs like a ranged weapon, with the Accurate, Rapid, and Long-range attack styles. The snowballs are not stackable.

When a snowball is equipped, other players will have a "pelt" option as default, rather than "walk here". When you pelt another player, you lose one snowball and your character automatically re-equips the next one in their inventory.

Even though the event is over, players can still pelt each other (they must also have a snow globe to 'gather' the snow to make the snowballs).

Players could also build Snowman by right-clicking a snowball in their inventory it and selecting the "Build Snowball" option. Clicking the resulting snow pile added more snow to the snowman and used another snowball from the inventory each time. It took 10 snowballs to build a lower torso, then 6 for the upper torso, followed by 4 snowballs for arms and another 10 for a head, totalling 30 snowballs to make an unfinished snowman. Since this is more than an inventory-full, players needed to gather more snow. Many people were unhappy because they had built the snowman, only to have the finishing touch (a hat) put on by another player. This required them to construct another snowman. After this, players had to get one of the five snowmen hats from the ice imps: dragon snowman hat, pirate snowman hat, barbarian snowman hat, snowman top hat

The RuneScape Banner during the event.

If one built or helped build a snowman, they would unlock the new "Snowman Dance" emote after completing it with a hat.

The Queen of Snow teleporting a player

Players could talk to the various snow imps to be teleported to the Land of Snow.

At the Land of Snow, players could talk to the Queen of Snow to get a snow globe, which fills the player's inventory with snow each time it is shaken, making it easier to build snowmen. 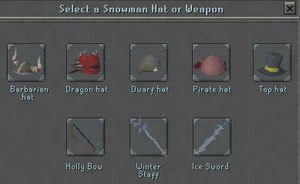 Select a snowman hat or weapon options in Land of Snow

In the Land of Snow, players were also able to equip the snowmen with one of three weapons each corner of the combat triangle - the ice sword, holly bow and winter staff. This is done in the same way as hats to create snow warriors, snow rangers and snow mages respectively. However, all weapons would disappear when a player left the Land of Snow.

Once complete, these snowmen would become level 29 with a maximum hit of 4 damage (equivalent to 40 life points), and would try to attack other snowmen, but could neither attack nor be attacked by players. They then fought each other with their snow weapons until one of them died. They also had the same "pelt" option as players, except that pelting them instead healed them for 1 hitpoint. When healed, a blue '1' splat appeared on the snowman, like that which is normally a '0', but a lighter blue colour. It was possible for players to put hats on top of a snowman just as another player puts the final piece on, therefore switching control of the snowman to the player that built it.

Snowmen pelted with snowballs would recover health, not lose it.

A player shaking a snow globe, a reward from the 2007 Christmas event.