From the RuneScape Wiki, the wiki for all things RuneScape
Jump to navigation Jump to search
The Old School RuneScape Wiki also has an article on: osrsw:Nardah

Nardah is a small drought-stricken desert city in the south-eastern Kharidian Desert. It appears dilapidated and old, almost like a ruin, with many of the sandstone buildings crumbling.

Nardah was founded in the Third Age by a woman named Nardarine. Nardarine was a Saradominist living in a city in the northern desert that was destroyed in a battle between Saradominist and Zamorakian forces. Nardarine escaped before the fighting grew serious, and found herself wandering alone in the desert. She prayed to Saradomin for aid, but Saradomin was too focussed on the ongoing battle to pay attention.

Elidinis heard her prayers, however, and brought water to Nardarine. Nardarine asked Elidinis to grant her a place where she could live a quiet life, free of the suffering of the God Wars. Elidinis agreed to this on the condition that Nardarine and her descendants swear an oath of fealty, and created the city of Nardah, giving Nardarine a statuette to worship her.

In time, more refugees from the God Wars came to the city. Nardarine allowed them to stay so long as they made the same oath of fealty she had made.

The following takes place during Spirits of Elid.

In year 169 of the Fifth Age, a Saradominist priest arrived to the town to preach Saradomin's ways. The inhabitants of Nardah had slowly forgotten their oath to Elidinis, apart from the museum's custodian. Although the Spirits of the Elid were angered at the inhabitants for forgetting their oath, they did not attempt anything for the time being. The Saradominist priest preached of Saradomin's benevolence, having convinced them by using the Protect from Missiles prayer. He also appeared to have a low view of Elidinis, even though she and Saradomin were on amicable terms during the God Wars, as Saradominist forces had given three golems as a gesture of goodwill between the two deities. The priest then convinced the Awusah to throw away the statuette of Elidinis, and they did so, throwing it into a nearby crevice.

This act was considered the last straw by the Spirits of Elid, Nirrie, Tirrie, and Hallak, who then proceeded to have the priest killed, with his body found floating in the river by Nardah's inhabitants a week later. Having believed the spirits as an old wives' tale, the mayor believed they were cursed by Saradomin for not protecting the priest. Any water the inhabitants tried to bring in themselves immediately evaporated.

The town then looked for aid, which was answered by both Malik the Carter, who was not affected by the curse (as he was from Pollnivneach), but in true Pollnivneach style, began charging absurd prices for water, charging each waterskin for 1,000 gold each. Rokuh also developed some choc-ice to allow the inhabitants to keep cool, although neither was enough and the town appeared to be on the brink of ruin.

An adventurer soon passed by the town and learned from Awusah about the curse. Awusah also told them about what the town had to offer, and asked them to help investigate the reason why they were cursed. After reading a ballad and stealing a key and a set of robes, the adventurer set out to search for the Spirits of the Elid, finding them in a cave after defeating the guardian golems. The adventurer spoke to them politely, and although the spirits were surprised the town had sent someone not from Nardah to come and help on the town's behalf, informed the adventurer that they had cursed the town, as although they did not mind the priest preaching his ways, he attempted to convert them into Saradominist followers, which they would not tolerate. The spirits stated that when the town discarded the statuette of Elidinis, they considered it to be the last straw, and that they would not undo the curse until it was back in its rightful spot. 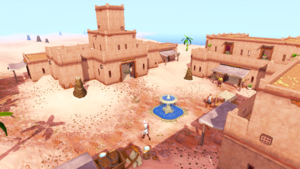 The town is bustling once more after the water supply is restored.
See also: General store

The map of Nardah shows a Herbalist shop. This refers to Zahur, the herbalist. However, while Zahur will clean your herbs for a price (see The Herbalist below), she does not actually stock or sell herblore supplies.

There are also some attackable guards in Nardah.

Players may use Ali Morrisane's Magic Carpet system to travel to and from Pollnivneach. This route costs 200 coins each trip. The fee can be reduced by completing the Rogue Trader miniquest and/or wearing a ring of charos (a). 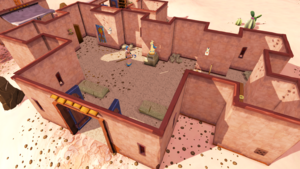 The Elidinis Statuette is an altar that restores prayer points and raises players' life points above their normal maximum. In order to use this altar, players must have completed the Spirits of the Elid quest. The altar may prove useful for players venturing into the desert for short amounts of time as the altars life point boost may negate the damage taken by travelling without a waterskin.

Zahur, the herbalist, will clean players' herbs. This will cost 200 coins per herb, and players will not receive any Herblore experience, so it is not recommended, since cleaning herbs yourself gives experience and does not cost 200 coins to do. She will also decant 4-dose potions into 3-dose or 2-dose potions, charging 2gp for each empty vial she needs while decanting potions. She will decant noted potions.

Bob Barter (herbs) in the Grand Exchange provides a wider array of service for free, and is easier to get to.

The clue scroll "As you desert this town, keep an eye out for a set of spines that could ruin nearby rugs: dig carefully around the greenery" solution can be found next to the cactus by the rug merchant.

Another clue scroll, an anagram, reads, "I EAT ITS CHART HINTS DO U", and when deciphered, leads one to talk to Shiratti the Custodian.