From the RuneScape Wiki, the wiki for all things RuneScape
Jump to: navigation, search
The Old School RuneScape Wiki also has an article on: osrsw:Undead chicken
This article is about the undead version of a chicken which roams the farm near Port Phasmatys and in New Varrock. For the equipable item, see Undead chicken (item). 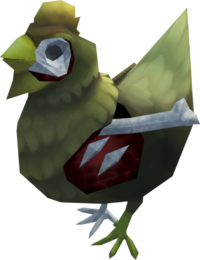 Undead chickens are the reanimated remains of the chickens owned by farmers Alice and her now-ethereal husband. The same occurrence has happened to the cows, who are now undead cows.

The reason for this lies with Necrovarus, who invented the method of repelling the vampyre overlords of Morytania. The animals were turned into zombies because of the mysterious powers of the Ectofuntus nearby. The citizens of Port Phasmatys were turned into ghosts as well. The chickens, as are the cows on the farm, are often hunted by players for their bones which are used at the Ectofuntus.

When Port Phastmatys was first released, several more undead chickens could be found inside the Port, in an open yard near the city's bank. Players could fight them while wearing bedsheets, and because no animation existed for this, it would appear that the chickens were being damaged while the player merely stood there. Possibly because of this, the undead chickens were removed from Port Phasmatys itself shortly after its release.