Not to be confused with the Winter events.

Winter Weekends is a series of events exclusive to members which was held during December 2012. There were five segments, for each weekend in December. It is notable that these "weekends" only include Saturday and Sunday, unlike some weekend events before which started on Friday and/or ended on Monday.

The Festive aura was released for the month of December in conjunction with Winter Weekends, and its bonus could work during each event.

1–2 December 2012
Drop quantities of or from various things doubled. They included:[1]

8–9 December 2012
Double rewards from certain minigames and D&Ds.[2][3] The minigames/D&Ds included were:

Some J-Mods hosted sessions. Meet-up locations were the minigame lobbies. Schedule below:

Additionally, there was an XP-gain contest. 25 Squeal of Fortune spins were awarded to the top three players who gained the most Dungeoneering experience during the weekend. Entrants were required to post in the official thread for their experience to be tracked, and winners were to be announced the following week. Official friends chat for those seeking groups was "RS DG". Experience gained in the form of lamps, promissory notes, and token conversions did not count.

Bonus was only available on the surface and not in Dungeoneering.

29–30 December 2012
Snowmen invaded various areas, and loot was available to players who participated in stopping them.[7] Snow warriors, snow rangers and snow mages were the snowmen available to kill. 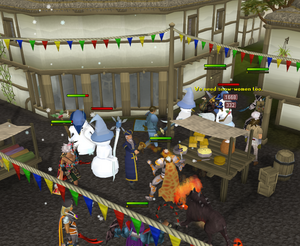 Snowmen invade Ardougne while Snowflakes fall in the background.

Invasions took place on the hour at one (not all) of the below locations:[8] Raids lasted for 15 minutes, with the location announced via the game news feed at the start of the raid (on the hour). "Valuable" drops seemed only to be available once per raid.

They cycled through the locations in this order:

Many players were displeased with the snowman raids events for reasons including the fact they were combat-based, often very crowded, and allowed use of Dwarf multicannons which were widely exploited in the hope of getting the first hit to get the drop, but they actually did not count to the player who owned the cannon. The usage of cannons also caused much lag in places where the Snowmen spawned during the weekend.