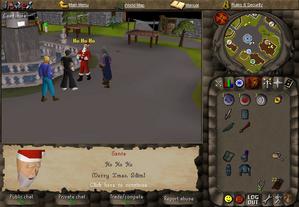 Father Christmas as he appeared in Varrock.

A player playing with a Yo-yo awarded at the 2004 Christmas event.

In 2004, there were no holiday drops and only one small holiday event, which was the 2004 Christmas event. Players could visit Father Christmas on RuneScape, starting from 21 December and lasting for two weeks. He could be found in the most popular towns of the game, which included Varrock, Falador, Ardougne, Catherby and Yanille. Santa Claus gave out free yo-yos to any player who talked to him. The simplicity of this event is likely down to the high amount of requests from players for a new holiday item.

Many players were disappointed because the new Christmas holiday item was untradeable. The decision to disallow trading of the item was to prevent the high pricing of it in the future. Some attempted to make the yo-yo tradeable, along with the scythe, but this led to problems, as only a few players had managed to find a way to duplicate these items, which included partyhats. Jagex discouraged the selling of rare holiday items from the start, stating when referring to Santa hats: "Of course you can sell them, but that wouldn't be the spirit of Christmas."