From the RuneScape Wiki, the wiki for all things RuneScape
Jump to: navigation, search
The Old School RuneScape Wiki also has an article on: osrsw:Duel Arena
For the music track, see Duel Arena (music track).

The Duel Arena is an ancient site where all players can go to engage in one-on-one combat. It is located slightly north-east of Al Kharid.

Despite being property of Al Kharid, the Duel Arena is in fact much older than the town. The arena was constructed as early as the Second Age by forces unknown. It became a training ground for the warriors of the Menaphite demi-god Het. There was also a nearby settlement, but little remains of that today.[1]

At some point in history, parts of the Duel Arena, and the area around it, were destroyed. The arena was most likely seized by the Zarosian forces during the early stages of the Kharidian-Zarosian War, where they marched on with little resistance [2]. The fortress of Kharid-Et, which lies slightly further to the south became the marker of the southern border of the Zarosian Empire. The Duel Arena itself suffered surprisingly little damage, even surviving the following violent campaigns in the Third Age. Over time, long after it had last been used, the arena was buried by sand and forgotten by mankind.

In the late Fifth Age, excavations started in a dig site east of Varrock, where the ruins of three ancient cities, Saranthium, a Zamorakian city and Senntisten, had been discovered. With agreement of Emir Shah of Al Kharid, archaeologists broadened their search in the desert town and uncovered the Duel Arena. With only ancient symbols, statues and carvings to remind people of its original purpose, the Duel Arena became a commercial attraction. Run by master duellists such as Mubariz, adventurers and other fighters alike were invited to participate in one-on-one duels in the partially excavated arena. A Saradominist hospital was erected with the aid of the Abbey of St. Elspeth Citharede[1] and the arena attracted many visitors to watch the duels. Archaeological worked stagnated in the area, and as such the Duel Arena has not completely been unveiled in the Sixth Age. 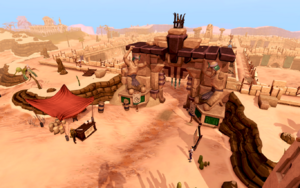 The arena is located north-east of Al Kharid. Players can rub a ring of duelling to teleport directly to the arena entrance. Other options include the Al Kharid lodestone and then walk north, an amulet of glory which teleports to the Al Kharid palace, or a fire altar teleport and then walk south. 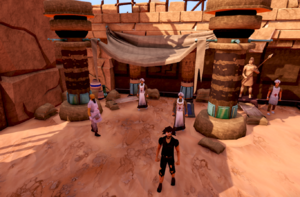 The hospital at the northern end of the arena. 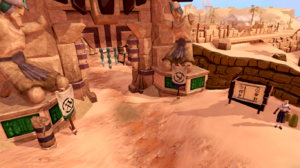 The banners in the Duel Arena.

The main building is located along the northern fence of the arena. This is where the majority of players stay to challenge others. There are a good number of surgeons there that can heal a player when needed. There is also an altar in the southern side of the building. The capability to heal and recharge Prayer are somewhat useless however, as when a player enters a duel, all statistics are restored to their normal levels. In the north east side of the building there are two bank chests. Since the graphical update, Fadli is no longer the banker and does not sell the player rotten tomatoes. 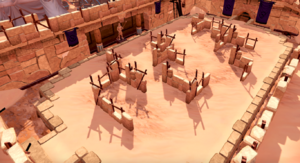 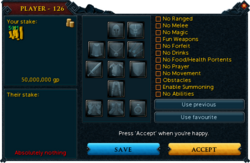 To fight another player, players must right-click their intended opponent and select the "Challenge" option. By doing so, they will have the option to do a "friendly" duel or a "staked" one. This will tell that player that someone wishes to duel with them, and they accept by challenging that player in return.

This will open the duelling options screen, which defines the parameters for the battle. The screen shows the name and combat level of the opponent, as well as what each player is offering up for a "bet", or a "stake". Free-to-play players can only bet up to their trade cap in coins or items worth up to that amount. Pay-to-play players can bet limitless amount of money, or items in any value. Finally, there are 11 different options that can be turned on or off and are adjustable by either player. These are detailed as follows:

It is also possible to take equipped items off on this screen, rangers should be careful not to check off shield if they intend to use a bow.

Some of the options cannot be combined with one another, as they would create situations where players would either not be able to duel. Examples include:

When the battle begins, players are teleported into the arena itself with a 3-second countdown before the fighting actually begins. If "No Forfeit" was not checked off, players who are losing (or simply wish to end the duel early) can retreat through one of the trapdoors, ending the battle immediately. Anything staked is awarded to the other player. When a player's opponent has a weapon that is faster than the speed of a longsword (For example, dual wielded weapons), it is relatively difficult, if not impossible, to forfeit, as the screen to confirm "Yes", disappears when attacked.

During the fight[edit | edit source]

After reciting "3-2-1-Fight!", the players can then engage in combat. Any player on the walls of the Duel Arena can throw rotten tomatoes at any other player. This will, however, cause no damage to either person duelling. When in the duel, they can only fight players with a yellow arrow above them, signalling they are one other player's opponent.

You have won the duel. 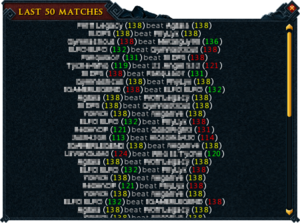 The results of the fights.

After the battle ends, players are transported back to the building beside the arena and all the stats are healed, along with fully recharged run energy (poison and stat-reducing effects are negated as well). Any ranged ammo that fell to the ground are automatically returned to the owner, if the ranger had no inventory space, the arrows would drop to the ground, ready to be picked up by the ranger only. If there was a stake, the victor claims the prize(s).

If the stake lasts for 15 minutes, the outcome will end in a tie and both players will be refunded the amount staked. Note that login off during a duel will result in a lose, not a tie. 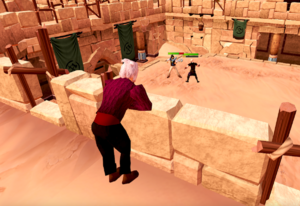 A player watching the duels from the "Lean on" option. The arrow keys can be used to move the view.

Near the gate and outside the main building, are scoreboards, where players can view the last 50 battles on that server. The scoreboards show the combat levels of the combatants and who won the round. The scoreboard automatically updates every five minutes. Lots of free xp is earned at 200-700 per death/kill based on how much damage is done to the opponent

If a player walks up the stone steps leading to the statue of Het, the player will be in a network of walkways on top of the walls of the various Arena rooms. A good view of the fights from up here is available. If you right click on a certain part of wall, you'll be given a "Lean on Wall" option. If you select it, you will get a close up view of the battles. You can exit this window by clicking the X in the smaller sub-window by the minimap. Another option is to use the orb of oculus to get a close up view, but the player can't be using the Legacy Mode interface, as the orb only works with the new interface system.

The following NPCs are found at the Duel Arena:

On 20 November 2007 a limit of 3,000 gold (or items value thereof) per stake, per every 15 minutes, was put into place. This update was heavily criticised by players. On 30 September 2008, the limit was raised to 5,000 coins and 60,000 coins depending on quest points. For free-to-play, the limit was raised to 10,000 coins. On 1 February 2010, the trade limit was updated again. Friends with each other's names on the friends list for over 1 month will have their trade limit doubled when trading with each other, tripled if over 2 months, and quadrupled if over 3 months. However, the limit was reset if one accidentally removed the friend from their list.

Currently there is no limit for duelling for members. All F2P duels have a limit of 40,000 coins.

On 20 November, 2007, A new way of participating in the Duel Arena called tournament mode was added. Up to 64 players can compete and the entry fee is based on the registrar the tournament is being held from; up to 1 million coins on register 5 for a 64 player tournament.

In the Tournament dungeon, 5 registrars hold 5 different tournaments with random rules varying on difficulties. The rules might include food or potion usage, healing between rounds and special attacks, although some rules never change.

All combat styles are always allowed (to discourage real world trading) and there are rarely ever obstacles. Additionally, winning or losing against a player will affect the winner's and loser's tournament rank. If a weak player loses against a high levelled player the tournament points won or lost won't be of much significance.

Tournaments are also restricted with a range of tournament ranks allowed; the tournament value depends on the set of rules and the rank range allowed. It also affects the players rank more or less at the end of the tournament respecting to its value.

On 20 October 2009, the tournaments were reworked in response to player feedback asking for fairer fights. As a result, registrars are now assigned on entry to the waiting area based on a player's highest status in strength/range/magic.

Rewards have also been affected: first place in a tournament will only receive 80% of entry fees, and second place now receives 20%.

With the Wilderness & free trade update on 1 February 2011, the tournaments were removed from the game. Jagex stated that it was not providing the service that both they and players wanted, and it was better to remove it overall.[3]