From the RuneScape Wiki, the wiki for all things RuneScape
Jump to navigation Jump to search
The Old School RuneScape Wiki also has an article on: osrsw:World 666 event

The 10th anniversary of the Falador Massacre was an event that began on 6 June 2016, 10 years after the original Falador Massacre. Shortly after that day's system update, news events were displayed that stated: Cursed You is having a 99 construction house party in Rimmington on world 111. He will level in 30 minutes. The message was repeated for values of 20, 10 and 2 minutes.

There was a faux house party as the message promised hosted by Cursed You after which the participating players were teleported to Falador.

The event had two stages that rotated in a cycle for a limited time after a Jagex Moderator activated it.

Players in the massacre area were possessed randomly by the ghost of Durial321 and gained the ability to attack other players using either abyssal whip, ancient staff or dragon dagger. The message News: Player is in Falador on a Massacre! was displayed to the world. Victims could not fight back, but did not lose anything upon death. The possession switched players periodically or if the player didn't attack others for a while and ended when Durial321 spawned.

After enough players were possessed, a giant "boss" version of Durial321 would appear, with a combat level of 321 and one million life points. The message Durial321 has returned to Falador! was displayed when this happened. Player-killing was enabled in Falador for everyone while Durial321 was alive. Deaths in this phase of the event were safe, whether caused by other players or Durial321.

After Durial was killed, a green partyhat sometimes appeared nearby, but it could not be picked up, and attempting to do so resulted in humorous messages:

After Durial321's death, one random player in the area was possessed by his ghost and the event reverted back to stage 1. 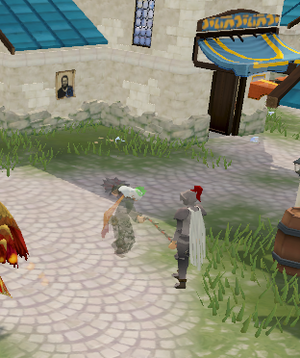 A player spoof being killed by the ghost of Durial321
Retrieved from ‘https://runescape.wiki/w/Falador_Massacre_(10th_anniversary_event)?oldid=35634402’
Categories:
Hidden category: