From the RuneScape Wiki, the wiki for all things RuneScape
Jump to navigation Jump to search
The Old School RuneScape Wiki also has an article on: osrsw:2021 April Fools

The 2021 April Fools event is an event where players could go to the Draynor Manor entrance to help banish K'ril Psssutsaroth who was spawned by a ritual carried out by Regina, Party Pete, and six Wannabe Cultists.

At the beginning of 31 March 2021, Regina and a ritual circle appeared near the entrance to Draynor Manor. During the day, six Wannabe Cultists would periodically appear around the circle and perform a ritual with Regina, with Party Pete also joining beside the ritual circle.

On 1 April 2021, the ritual circle activated, spawning K'ril Psssutsaroth at Draynor Manor and many Inflatable Invaders around Gielinor. Speaking to Regina reveals that she was attempting to create a portal to the demonic homeworld, Infernus. However, Party Pete inadvertantly sabotaged the ritual by performing a celebratory 'balloon drop' at the ritual circle, which instead caused the ritual to create a portal to the 'balloon homeworld', Inflatus. This allowed K'ril Psssutsaroth and the invaders to enter Gielinor in an attempt to take over the world, while Regina's cultists abandoned her for her failure. Pete reveals that he had attended the ritual because he received a letter from Regina's father addressed to (smudged) 'P---- Pete' warning of Regina's plans, although it appears that he simply turned up to celebrate and that his sabotage was not intentional.

Regina and Pete both agree that the best course of action to resolve the situation would be to pop the giant K'ril Psssutsaroth balloon to close the portal. However, to do this they would first require balloon scraps from the many invaders found around Gielinor. The player could help by using a pointy stick to pop the Inflatable Invaders and collect the balloon scraps.

After 1 April, Inflatable Invaders ceased spawning across the world, but still spawn inside the Draynor Manor courtyard, making it possible to complete the event still. 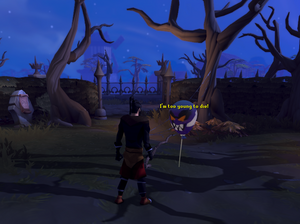