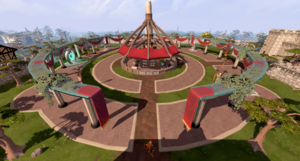 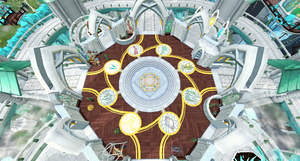 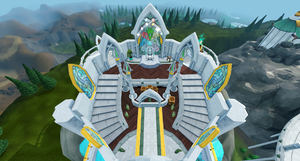 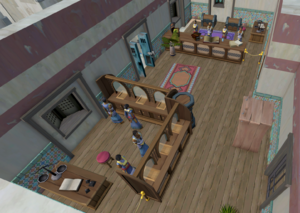 The Grand Exchange (abbreviated as GE) is a trading system for players to buy and sell almost all tradeable items. Members have eight Grand Exchange slots in which they may trade items, however free players are limited to three. Traders do not need to advertise, meet each other, or even wait at the Grand Exchange for their trades to complete.

All coins and items from fully and partially finished trades can be collected at any bank, but not at bank chests (excluding Prifddinas clans' chests, Shantay Pass, Burthorpe, Lumbridge Market, Clan Wars, and Castle Wars lobby) and deposit boxes. Additionally, players will receive a message in their chatbox when the status of a trade offer is updated. Many players find it useful to sell items on the Grand Exchange rather than to a General Store, as the profit margin is much larger for useful items.

The Grand Exchange also refers to the location of this trading system, which is an official marketplace north-west of Varrock. It was released on 26 November 2007 and has since replaced the older player marketplaces in Varrock and Falador. It is a popular place and usually crowded on high-population worlds such as World 2. The Grand Exchange received a graphical update on 9 August 2011 giving it a brand new image and design, splitting the central booth into 4 separate booths, and adding a musician. The Grand Exchange received a second graphical update on 2 October 2017, which kept the style of the previous update, but integrated the four booths back into one central booth.

Aside from north-western Varrock, the Grand Exchange branches can also be found in Prifddinas (in the Tower of Voices and in Max Guild), and in Menaphos (in Merchant district). 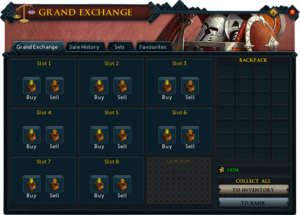 The Grand Exchange tab has eight slots for players to make buy and sell offers on items, and one slot to retrieve a lent item. When making an offer, item prices are initially set to guide value. This can be adjusted in amounts of + or - 5% and 20%, or a custom price can be entered. Existing offers may be edited or aborted by clicking the respective button in the overview page or the in-progress offer window, editing an offer will reset the players place in the offer queue. Completed offers may collected from this tab or from any bank that offers a collection box, the collection box can also be used to track existing offers. When collecting unstackable items, players can right-click to choose whether to collect the item noted or unnoted.

The sale history tab shows the player's 20 most recent transactions done on the Grand Exchange.

Most armour sets can be assembled into sets to save space. They behave like ordinary items except that they cannot be worn or used until they are disassembled. Only the Grand Exchange clerks can assemble and disassemble sets, and they will do this an unlimited number of times for free. Right-clicking a set and selecting "destroy" will not disassemble it.

The favourites tab allows players to view their favourited items and their guide price, items clicked on from this tab will be taken directly to a buy offer. Items may be favourited by searching for the item in the tab or by using the star icon when buying or selling the item, this can be keybound. Members may favourite up to eighteen items and free-to-play can favourite six. 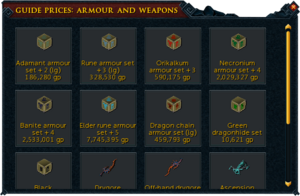 An NPC informant displaying the prices of certain weapons and armours. The cubes are item sets. 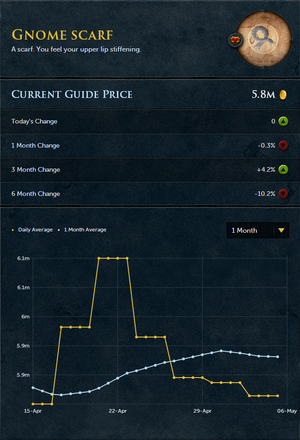 Price of Gnome Scarf over a 30 day period

Jagex has never published the Grand Exchange's exact pricing algorithms, although there are some reasonable guesses. By using the laws of supply and demand, the prices of items are updated depending on recently traded values and volume. For items with low volume, prices update every few days or even weeks. Jagex can also intervene and adjust the prices themselves.

Because of an update on 1 February 2011, there are no longer price restrictions, however there are guide prices and an upper limit on how many of an item players can buy at once.

Since 9 January 2023, 2% of the sales price of items is withheld by the Grand Exchange in the form of a tax intended to remove gold from the game[1]. Items traded below 50 coins and Bonds are exempt.

All trade restrictions are intended to reduce price manipulation, real-world trading, and/or unfair interactions between players with different levels. On the issue of price manipulation, Jagex said, "We are keen to keep a player-driven economy, so the prices are worked out using the supply and demand rules above. We will only intervene as a last resort, and only if we think price manipulation is going on, although the system has lots of safeguards to prevent that."[2] Trade restrictions are those safeguards. On 1 February all price (but not necessarily trade) restrictions were removed. Trial members had a trade restriction on the Grand Exchange of 50 of certain items. This prevented new accounts from being made simply to use the 6 Grand Exchange slots available to members, for merchanting/flipping.

Buying rate is restricted to a certain quantity every 4 hours. Some items have a connected limit, meaning that players can only buy a certain amount of either item, or a mix of the two up to a particular point:

There continues to be much activity around the Grand Exchange as a main area for some players to operate scams, manipulate other players into giving away items or money, and the age-old luring of players to areas they can be killed and their items taken.

The jingle that plays when an offer is completed.

The jingle that plays when an offer is updated.