Senliten (pronounced "Sen-lit-en") the Pharaoh Queen once ruled the lands south of Al Kharid, now known as the Desert. She is summoned during the Missing My Mummy quest, where the player attempts to reunite the parts of her body and name that were separated during an embalming ritual or moved during the raids on her Mastaba ordered by Ali Morrisane.

She was born to an unnamed pharaoh, and as such had a high standing amongst her people. When she was between 3 or 4 years old, she was playing in the pine forests in eastern Kharidian, while being watched by an elderly servant. Being young and nimble, she managed to get away from her elderly watcher, heading into deep jungle. While there she almost got attacked by a jackal but was saved by the desert monkeys who lived in the jungle, who scared the jackal away. The servant informed the palace guards, and by that time, the monkeys brought her to the edge of the forest where her father's men retrieved her. The servant was then tied to a stake in the middle of the hotlands to die as punishment for failing to keep her safe. 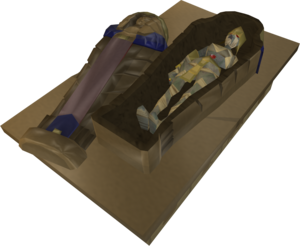 Senliten's mummy in her sarcophagus.

During her rule, she was fighting off Zaros and his soldiers with the help of Icthlarin and the Stern Judges, though she died before the war was over, as she is unaware of their betrayal. She considered Zaros to be the root of all evil; due to her passing, she did not know anything about the other gods and the massive war that took place during the Third Age. She had one son, Osmumten, and was proud that she was the first ruler to be buried in a mastaba, as a testament of her power. She was given a proper burial, with everything considered for to ensure she would live happily in the afterlife. The mastaba was also cursed so that those who were not undead, her servant or part of her bloodline would be cursed to serve her for eternity to ward off tomb raiders.

The following takes place during Missing My Mummy.

During year 169 of the Fifth Age, tomb raiders hired by Ali Morrisane partially looted Senliten's pyramid, causing her much distress and she had forgotten her identity. An adventurer who investigated the team's disappearance encountered her, but was unable to make contact due to the raided chambers. Leela suggested that they restore her tomb and memory, which they were successfully able to do. Senliten was grateful that someone had remembered her after thousands of years, contacting Leela with a vision, and she soon arrived at the temple to speak with her.

The following takes place during The Curse of Arrav.

Per tradition, Senliten's organs were properly preserved by the people. After encountering the Varrockian hero Arrav, who had been forcefully subjugated by the Mahjarrat Zemouregal, the adventurer contacted Ali the Wise. Ali informed him of Zemouregal's defences, while the adventurer wanted to help Arrav. Recalling they had helped a mummy earlier, they soon met Senliten and asked her how to preserve organs. Senliten informed them that they were living in dark times if someone was subjugated this way, and also told them that they would need a canopic jar, three dwellberries, sacred oil and a ring of life, giving them the jar in the process. [1] This resulted in Arrav freeing himself from Zemouregal's control during the 18th Ritual of Rejuvenation and finally obtaining the peace he was denied for thousands of years.

The following takes place during Do No Evil.

After speaking with Leela for many hours, Senliten called the adventurer over. She had learned from Leela how her empire had changed, from lush forests and greenlands to barren desert and the monkeys were nowhere to be seen. She tasked them with bringing the monkeys back to the desert to reinstate a part of rightful life. [2] The adventurer discovered three wise monkeys in Awowogei's service, who were actually desert monkeys who escaped the massacre by working together to escape. The adventurer persuaded them to return to the desert, obtaining Awowogei's permission to set up a Monkey colony there; although the first colony was destroyed shortly after it was built. The adventurer learned from a dead monkey that three monsters had arrived and slaughted all but the three wise monkeys, taking them to different places. They dispatched the monsters and rebuilt the colony. Senliten was able to feel Apmeken's grace returning to the desert [3], and was disgusted with how Amascut stole and warped Apmeken's senses. [4]

With the desert slowly returning to its former glory and her memory slowly returning, Senliten recalled a time when she was Pharaoh, touring her lands. They were ambushed by a scouting party of Zaros's forces (before open war), fending them off, but her boat was sinking in the process. A crocodile had been tailing the boat for days, and when it sank, came upon one of her retinue, who was fond of food. The crocodile dragged this member away beneath the surface, never to be seen again. This made her realise the crocodile's motives, and the lesson of moderation. [5] Unfortunately by this time, the crocodiles were not as easily sated and she tasked them with finding out what was causing their unusual aggression. The adventurer soon discovered that the crocodile goddess Crondis had been corrupted by Amascut, and purged her of the corruption. Crondis immediately halted the crocodiles' aggression in a snap upon learning her brethren were indiscriminately attacking people. [6]

Following this, Osman visited the mastaba and was upset with Leela's actions, believing it to be too modest. Senliten informed them that her mastaba was not a place to argue, and agreed with Leela that he wouldn't listen and would make matters worse. [7]

Senliten soon learned that both Leela and Osman were descendants of her son Osmumten, who had been usurped by former followers of Tumeken who did not understand the meaning of his sacrifice. She was proud of what her son had done as others followed him, but did not like recalling her son's death. She informed the adventurer to find out why the people were weak and unwilling, and if possible, convince Osman to stop what he was doing. If he could, then she would inform him of her grandson's name and make a rightful claim to the city. Osman usurped the Pharaoh his own way, though the consequences of this have yet to appear.