From the RuneScape Wiki, the wiki for all things RuneScape
Jump to navigation Jump to search
For other uses, see Bonfire (disambiguation).
For the ability to add bones to a fire, see Cremation.

A player adding logs to a bonfire. 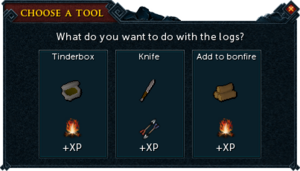 The "craft" menu when adding to bonfires.

Bonfires are one of the best methods for training Firemaking and were released with an update on 10 May 2012, allowing players to add more logs directly onto a fire. This ability is available to members and non-members and gives strange rocks and Treasure hunter keys.

There are 6 permanent or everlasting bonfires:

They are not to be confused with eternal fires, a more common fixture that also acts as a permanent fire but does not offer the bonuses that can be earned from bonfires.

Players can add logs onto any fire, and everyone contributing will receive bonus Firemaking experience for the logs added. Also, players will receive a health boost that is dependent on their Firemaking level and the type of logs used. Player-made bonfires will also provide a +10% boost to Cooking experience earned while cooking on the fire (the permanent bonfires listed above will not provide this XP boost however).

Bonfires last different lengths of time based on the type of logs used to create them. The colour of the logs will also be different depending on the type of logs used. This is most noticeable with magic logs. Logs are added to bonfires at a rate of 3.6 seconds per log (for maple logs and higher). Bonfires will die away after a set amount of time, even if players keep adding logs to it.

Logs can be added to a bonfire in three ways:

Just like when chopping down a tree, logs will continue to be added to the fire without needing to click constantly. It is possible for players with a low Firemaking level to burn their hand and be unable to throw a log into a bonfire occasionally.

Bonfires can be lit during Dungeoneering; fires themselves do not have a "use" option, but branches can be added to bonfires through the "craft" menu or by using them on the fire. The health boost can be obtained, but bonfires will not grant increased Cooking or Firemaking experience.

Using logs with a bonfire instead of starting a new fire grants the following experience values. These values may change depending on a player's Firemaking level. These experience values may be increased with the firemaking boosts detailed below. Players can expect to burn anywhere from 800-990 logs per hour depending on if the player is focused, using presets, and using a BoB familiar. 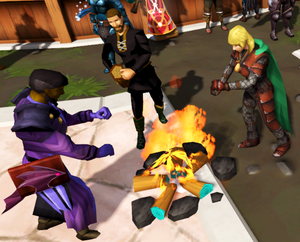 A group of players adding to a bonfire.

Adding logs into a bonfire that is being used by more players grants a Firemaking experience boost compared to the basic experience for adding logs to one's own bonfires.

A significant boost is also obtained through utilising bonfires based on the player's Firemaking level. For every Firemaking level, the experience granted is boosted by a small, constant percentage. This effect is immediately noticeable when levelling up during training, as the maximum experience gained through burning the same logs instantly increases by 1 on many occasions.

This boost can be further increased by the aid of other items boosting Firemaking experience, such as the ring of fire, flame gloves, the Dwarven army axe, and Bonus experience, though Summoning familiars do not add to the boost.

After adding 5 logs or bones of the same type in a row to a bonfire, a boost to the maximum life points cap will be applied, up to 5% of the total life points originating from the player's Constitution level and worn equipment. The percentage of life points boosted depends on the player's Firemaking level, and the duration of the boost depends on the type of logs used on an existing bonfire, regardless of the type of log used to start the bonfire. The boost stacks additively with the life point boosts from the thermal bath, Fortitude, and multiplicatively with life-point boosting equipment. The bonfire boost carries into any dungeons entered after receiving it, and persists even on death.

The timer will continue running even when logged out.

The duration of the life point boost can be increased by 25% (Bonfire booster) by purchasing the effect from Death's Store with 250 Reaper points, or alternatively with 2,500 Slayer points.

When cooking on a bonfire (excluding the bonfires in Prifddinas, the Yeti Town and Menaphos), players receive a 10% boost in Cooking experience. This stacks with other boosts and bonuses to Cooking experience, like the dwarven army axe and bonus experience. If a bonfire goes out while a player is cooking food, they will receive regular experience rather than boosted experience for that piece of food if it is successfully cooked.

Each type of log has a fixed burning timer; the better the log, the longer a fire will burn. It takes 3.6 seconds to put each log onto a bonfire. A log with a longer burning time enables players to cook on the fire or add additional logs to the fire for a longer time without needing to start another fire. Therefore, it is beneficial to use better logs when lighting bonfires. Examining a fire reveals the type of log burned.

Training Firemaking in this way also gives the possibility of finding strange fire spirits who will reward you for freeing them from their wooden prisons.

The chance of freeing a fire spirit is not based on the type of logs used. It was confirmed that every log holds a 1/100 chance to release a fire spirit. Fire spirits last for one minute before disappearing. It is possible for multiple Fire Spirits to be present concurrently.

To free them, the player must click on the spirit. The spirit gives rewards, usually some common runes, coins, stone spirits, gems, ashes and various charms.

Fire spirits can be a decent way to obtain charms for Summoning for low level players without combat.