From the RuneScape Wiki, the wiki for all things RuneScape
Jump to navigation Jump to search
The Old School RuneScape Wiki also has an article on: osrsw:2013 Christmas event

Up to Snow Good was the 2013 Christmas holiday event. Zamorak, angered at his loss in the Battle of Lumbridge, has sent his greater demon minion, San'tar Klaws, to kidnap Santa Claus and ruin Christmas. Participating in the event involved players choosing between Santa's "Naughty" and "Nice" lists, deciding whether they want a Zamorakian Christmas, which would be filled with chaos and disorder, or if they want a traditional Christmas, full of festive cheer.

A number of characters from past Christmas events made small cameos in the event, including the Snow imp, the Queen of Snow, Jack Frost, and Marmaros and Thok.

The event could be started by entering the Lumbridge crater, found just west of Lumbridge. Players could either teleport there by using the Lumbridge lodestone or talking to a Snow impling next to the Varrock Grand Exchange, Varrock Square, or near Falador square, who would teleport them to the crater. 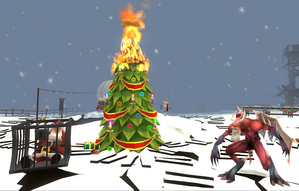 When the player entered the crater for the first time, Santa Claus would call to them for help. They could talk to San'tar Klaws or the imprisoned Santa to discover that San'tar was sent by Zamorak to ruin Christmas and that he kidnapped and imprisoned Santa after he attempted to hold a fair to cheer up the citizens of Lumbridge.

San'tar will say that the Christmas festivities have been cancelled, but after asking him if there would be any presents, he said that the player can earn some presents if they participate in the fair in a suitably naughty manner, ruining Christmas. Santa Claus would interject and say that's not the only way, and that if they participated in the fair nicely, their Christmas cheer could scare the demon away and save Christmas.

To either impress San'tar Klaws or scare him off with merriment, players had to gain either 750 Nice points or 750 Naughty points. Both types of points could be obtained by participating in one of the activities of the fair, with each activity having a "nice" way to complete it and a "naughty" one, with the rewarded type of points being dependent on the action selected.

Every 20 minutes, one of the activities (except the decorating tree with Baubles activity) would become an "Enhanced Event" and would grant double Naughty or Nice points for participating. The Enhanced Event could be seen on the interface at the top of the screen.

Rewards would also be unlocked as the player participate in the event, unlocking once they reach a certain a combined total of naughty and nice points. 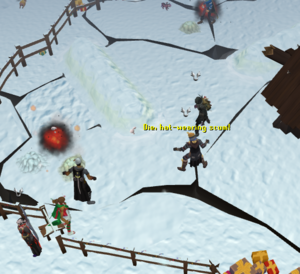 Players participating in a snowball fight.

To gain points in the event, players gathered snowballs from their chosen pile and threw them at other players. Snowballs could be dodged by moving before being hit. Points were only awarded when a player was successfully hit. If another player was successfully hit with an "enchanted snowball", then one Nice point was earned, and hitting a player with an "exploding snowball" would earn one Naughty point. Players who were hit too many times would be evicted from the arena, and all of their snowballs will melt. Players who succeeded in evicting a player out of the Snowball Arena would receive three points.

The annual Wizards' Tower banquet was hosted in the north-western section of the crater, and it was once again being catered by the goblin cook Kringle and his troll apprentice, Kris. The items they cooked "incorrectly", such as Turkey drumsticks, Yule logs, Christmas puddings, Roast potatoes, and Mulled wine, could be served to the wizards for Nice points, while the food they cooked "correctly", such as Rubber chicken drumsticks, Wood logs, Cannonball surprises, Rocks, and Vinegar could be served for Naughty points.

The player was asked to serve the eight wizards seated at the table from the food provided. Serving the food requested by the wizard gave a nice point, which increased every five correct servings until it reached five points. Similarly, serving the corresponding "naughty" foods would earn the player naughty points.  If the player took too long to serve a wizard's order of if they serve dthe incorrect food (either nice or naughty), their points multiplier would be reset to 1. For example, if a wizard requests a yule log, serving them yule log earned one to fiveNice points; serving them Wood log earned one to five Naughty points, and serving them food other than a yule log or a wood log would NOT earn any points (and reset progress back to a point when next serving a correct food item). The points received were doubled if the Wizard Banquet was the Enhanced Event. 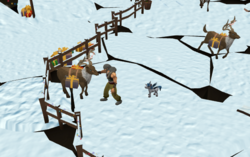 A player stroking a friendly reindeer

The Reindeer Petting Zoo could be found to the south-east area of the crater. The Snow Imp was in charge of the zoo and informed players that San'tar Klaws cursed some of the reindeer, turning them into "evil" reindeer. Interacting with either type of reindeer would give points, with friendly reindeer giving nice points, and evil reindeer giving naughty points.

Stroking either type of reindeer would reward players with two points, and feeding them carrots, which could be obtained from the buckets around the zoo, would reward a player with three points. A player could convert the reindeer between friendly and evil by right-clicking them, saying either "Ho ho ho" or "Muahaha", depending on the direction of the conversion, and this would also reward a point.

Finally, the Christmas tree in the north-west area of the crater could be decorated with baubles, rewarding either ten naughty or nice points, depending on whether it was decorated badly or not. Baubles could uncommonly be obtained while skilling, from monster drops, and from the Squeal of Fortune. 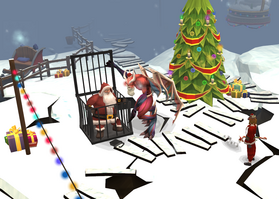 After obtaining either 750 Nice points or 750 Naughty points (unlike the tinsel scarf, the festive jumper, and the San'tar Klaws pet, which were unlocked with the sum of Nice and Naughty points, to get Santa out of the cage and earn the Rockin' Around the Tree emote, the player would need 750 of either Nice or Naughty points), San'tar Claws would either be terrified of their Christmas cheer or impressed by their naughtiness, and as a result, he would free Santa from his cage and disappear. Santa would either thank the player for saving Christmas or chide them for ruining it, but regardless, he would reward them with a Large festive lamp if they were a member or a small festive lamp if they were a non-member. All players would also get the emote. 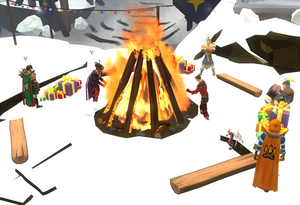 Besides the main event, a number of other activities could be performed around the crater. Thok created a large bonfire, on which things could be cooked for extra Cooking experience. Adding logs to the bonfire also granted boosted experience, with more experience being given to players who wore a festive outfit (items rewarded from Christmas events). The Christmas presents next to Thok served as bank chests, making them useful for restocking food and/or logs.

A number of other recognisable characters could also be found around the crater, most of whom served no function but could be chatted to for optional dialogue. These included:

The Varrock Grand Exchange was also festively decorated as part of the event, and Snow implings could once again be found around Gielinor and caught for "stocking fillers" and a small amount of Hunter experience.

These rewards were unlocked when the player gained 750 Naughty or Nice points and drove away the demon. 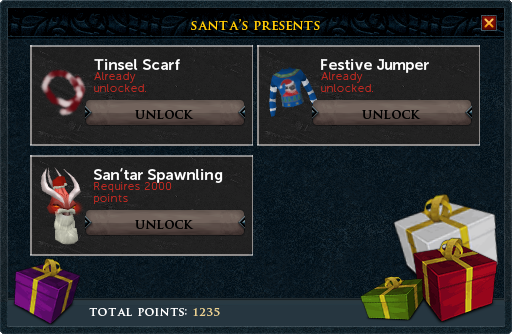 These rewards were unlocked, not bought, at certain levels of "total points" i.e. naughty and nice. So a total of 2,000 points would allow all rewards to be unlocked. They could be accessed and unlocked by clicking on the presents under the Christmas tree in the crater.

In the north-east corner of the crater, there were two easels, each containing a list. The top five players for each type of point (Naughty or Nice) were ranked on the respective list, Naughty and Nice. The points were recorded for the current login session; players who logged in started with no points, and players who logged out were removed from the list.