From the RuneScape Wiki, the wiki for all things RuneScape
Jump to navigation Jump to search
The Old School RuneScape Wiki also has an article on: osrsw:Pillory

The Pillory was a random event in which players could be sent to the pillory by a pillory guard. Prior to the 25 February 2009 update to random events, it was only available to members attempting to use the Thieving skill or by random (rarely). Since then, a player could receive this random event at any point.

The player needed to unlock the cage to escape, by clicking on the correct symbols. 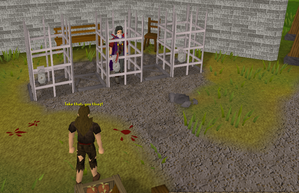 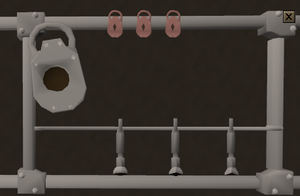 It started out with three locks; if a player missed, it reset and an additional symbol was added up to a maximum of five symbols.

When the pillory random event was solved, a reward would be received. The only possible reward from this random is a random event gift.

Before the 25 February 2009 update, some players would attempt to steal from stalls beyond their level. They wouldn't be able to steal, but were still able to get random events pertaining to stealing, one of them being the Pillory event.

The pillory cages are located in Varrock east of the general store, in the western part of Seers' Village and slightly north of the bank in Yanille.

Outside the pillory, the tramp, a non-player character, throws rotten tomatoes at the players inside.

Note that it was possible to teleport out of the pillory. Attempting to pickpocket the pillory guard will result in being caged, and you cannot teleport out. The player must apologise to the guard to leave.

Solving the pillory lock while on a free world would teleport the player to Lumbridge without a reward.