The Summer Beach Party was an event that first ran from 29 June 2015 until the 31 August 2015. The Lumbridge Crater was transformed into a beach and the event was organised by Battle of Lumbridge survivor Reyna. 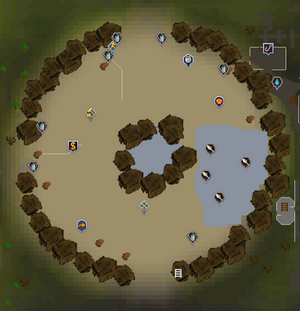 A map of the beach party. 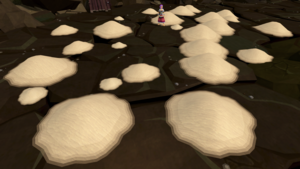 Reyna amongst heaps of sand

Half a week prior to the Summer Beach Party itself players were able to bring Reyna up to 24 buckets of sand per day, in exchange for mystery boxes. Mystery boxes could also be obtained through Treasure Hunter or daily challenges. Rewards from the mystery boxes include:

Big mystery boxes could be claimed from Reyna until 12 July, the number received dependent on how many mystery boxes were opened. As well as the above rewards, excluding the Prize token, they also give the chance of winning a crab hat.

Speaking to Reyna any time prior to the party also rewarded the player with a beach party ticket, to be redeemed once the party has started for 4 cocktails, an ice cream, and a random reward item token.

There were various activities around the beach, which could be used to gain experience in different skills. Unique item tokens could also be a rare prize from any of the activities.

The filling of a temperature gauge to the right of the screen indicated how close the player is to reaching the daily experience cap, which could be reset 3 times a day by eating an ice cream.

You can only eat an ice cream at "Inferno" status. Attempting to eat more than 3 ice creams gives the message "BRAIN FREEZE!
You can only cool yourself down 3 times a day."

Every 15 minutes a different activity is spotlighted, which provides an extra 10% experience buff to the relevant skilling activity. The spotlighted activity differs from world to world. 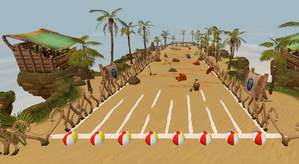 The Beach ball rolling portal can be found in the northern area of the beach. Entering it teleports the player to the beach ball rolling event island. Participating in the Beach Ball Rolling grants Agility experience. 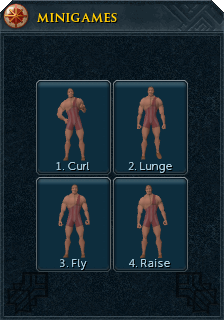 There are five body building podiums south of where Clawdia spawns; these podiums are run by two bodybuilders, Ivan and Greta. Participating in the activity gives Strength experience when doing one of the following four actions:

Players earn experience whichever action they perform, but quadruple experience can be gained by following the bodybuilders' demonstration. 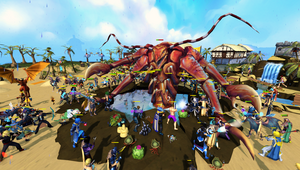 Clawdia is an hourly boss, which emerges from the water-filled hole in the middle of the crater 45 minutes after every hour. This is indicated by rain falling at the beach. She is level 250 and has 1,500,000 life points, damage scaling to the player's level.

Upon defeat, Clawdia rewards players with ice creams, anti-sun potions and cocktails. There is also a rare chance to receive a unique item token. Note that Clawdia can still be fought for rewards if the temperature gauge is full.

To get the most rewards from Clawdia, players can hop from world to world to defeat Clawdia during the five minutes that she appears each hour. 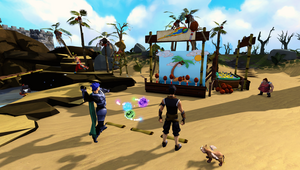 There are two coconut shies on the beach, located in the south-eastern corner and run by Sarah. They provide Ranged experience relative to the type of projectile thrown. Tropical coconuts can also be deposited here for Farming experience.

A player can successfully throw 300 times before reaching 100% temperature. 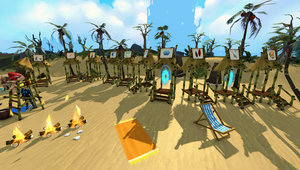 The D&D portals with Shooting Star and Evil Tree active

The south-western corner features 7 Distraction and Diversion portals, which can be entered to teleport the player to the corresponding D&D. A lifeguard announces which D&D activities are active on the players world.

The portals featured include:

Note: If the world's current shooting star is in the wilderness, players will be given a warning beforehand. 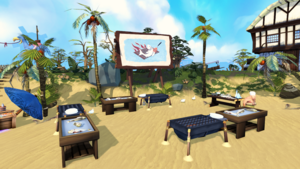 Grills and large chopping boards can be found in the north-eastern corner of the beach. They can be used to gain Cooking experience, and are run by Nigel.

Raw tropical trout may be deposited here for Fishing experience.

This activity can be done ~108 times before reaching 100% temperature.

There are multiple palm trees found around the beach, grown by Palmer. They can be harvested for Farming experience and tropical coconuts.

Additional Farming experience can be gained by depositing the tropical coconuts in the pile of coconuts east of Sarah, by the coconut shies.

Note: You can even get the XP for depositing coconuts after you max out your thermometer.

500 coconuts can be gathered before reaching 100% temperature. 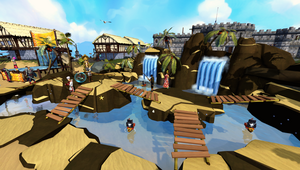 The rock pools can be found on the east side of the beach, overseen by Wellington. Raw tropical trout can be caught here for Fishing experience. Further Fishing experience can be gained by depositing the raw trout at the table north of Nigel, by the grills.

94 Trout can be fished before reaching 100% temperature. 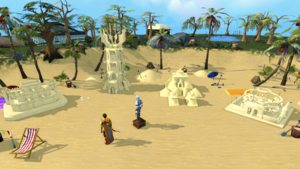 Foreman George runs the sandcastle building, located in the north-western corner of the beach. Building the sandcastles rewards Construction experience. Players can build the corresponding tower to the current NPC guest to earn double experience. The NPC guest will spawn next to Foreman George and will change every few minutes. Players will automatically stop shoveling after 21 scoops of sand.

This activity can be done ~301 times before reaching 100% temperature.

Opening mystery boxes gives you a chance to win a Prize token, which can be clicked and redeemed for any of five unique prizes.

Tokens may be earned through skilling, from Clawdia, or purchased with RuneCoins from Flo's Fun Item Shop, Sheldon's Cosmetic Item Shop, or Gill's Pet Shop. Tokens are unable to be purchased on the Grand Exchange although they are tradeable between players. The title [Name], King/Queen of the Sandcastle is unlocked by redeeming all the tokens.

The following items can be earned from beach activities or killing Clawdia:

Rewards obtained through other means are:

These titles are not purchasable, instead earned from doing certain things.

Right clicking lifeguards can be used to see the amount of ice creams eaten, Clawdias killed and thermometers filled.

This information has been compiled as part of the update history project. Some updates may not be included - see here for how to help out!
Retrieved from ‘https://runescape.wiki/w/Summer_Beach_Party_(2015)?oldid=35690610’
Categories:
Hidden category: