From the RuneScape Wiki, the wiki for all things RuneScape
Jump to navigation Jump to search
This article is about the Distraction and Diversion. For the beasts mentioned by the Gorajo, see Sinkhole (creature).

The official worlds for Sinkholes are worlds 134 (P2P). In case this world is full, the unofficial alternative is world 78 (P2P).

Sinkholes is a Members-only Dungeoneering Distraction and Diversion released on 5 February 2013. It takes place outside Daemonheim at 30 minutes past every hour, in resource dungeons that were once used by Bilrach as storage rooms - these are scattered across the world and the Gorajo have since found them. Their name is derived from a dangerous creature native to the Gorajo realm.

Ironman accounts cannot participate in this Distraction and Diversion.

The activity can be started by talking to Talsar located in the Daemonheim camp. He will give the players information about himself and the location and time of the next sinkhole due to emerge with each one due every hour. However, players can only play twice per day, resetting at 0:00 UTC. If an attempt is made to play a third time, the player receives this message: "You can only enter a sinkhole twice a day before it becomes unstable. Return tomorrow to play again." It is additionally possible to enter the same sinkhole twice, though both attempts will count towards the two sinkholes which may be entered per day. Only a completed round counts as a daily turn, so if a player lags out during a round or is simply waiting to enter, it does not count as one of the two daily turns.

He offers the players the option to teleport to the expected sinkhole location five minutes before it spawns. The teleport option can be used up to three times per day. If a player is out of teleports they can still ask for the current location and find their own way there.

When the sinkhole spawns, a doorway similar to a Resource Dungeon entrance appears on the surface. The entrance leads to a grouping room, with a Gorajo hoardstalker who will explain the activity. You remain on your starting world and players are only drawn from that world. Any items on the player must be banked in the grouping room, including those allowed in Dungeoneering; experience pendants, the orb of oculus, and any aura. The only exceptions are ring of kinship and Daemonheim aura. The player can then notify the Gorajo that they are ready to be grouped. The game will start once five players are ready.

Players can leave the grouping room by using the ladder, but they will use up one of their two daily turns, according to a message in-game. Teleporting directly out of the sinkhole is not allowed. However if they logout to the lobby, when they next log in they will find themselves back in Daemonheim without using up a turn.

If you are unable to start a game due to there being not enough players, the hoardstalker will teleport you to safety (back to Daemonheim), when the sinkhole collapses. This does not use up a daily turn.

Sinkholes appear in various locations. There are 20 possible locations total: 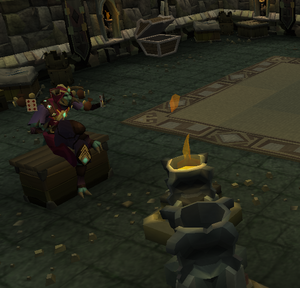 Once started, all five players are teleported into a dungeon similar to that in Dungeoneering. Players will spawn in the starting room, with Gorajo hoardstalker sitting in the middle. After a three second countdown, the doors will unlock.

In the same room, players can choose one of three attack styles (Melee, Magic, Ranged) from the tables. You will be automatically equipped with suitable armour and weapon once chosen. The system remembers your choice, so you need to pick one only when you are new or you would like to switch.

Also available is food in the crate. There are doors leading to the rest of the dungeon, and one locked door leading to the treasure room. The deeper dungeon rooms contain monsters to be defeated, resources to be harvested and exploratory totems.

There is a deposit chute in the starting room that allows you to deposit resources from your inventory (see below).

An exit ladder can be found if you would like to leave.

In the dungeon, there are three kinds of resources: raw materials, Combat Totems, and Exploration Totems.

Resources are deposited with the Gorajo in the starting room or in deposit chutes found throughout the dungeon. There are typically 3-4 chutes in a map and are marked with a bank symbol on the minimap. Each resource has a quota of how many can be deposited for points. Deposits beyond this number do not award points, though they do count towards whether a player has "completed" the objective. (see Rewards section) The raiding ends when all quotas have been met or after seven minutes.

Cards are the critical element of the Treasure Room, which determines each player's reward at the end of the game. Cards can be acquired under totems, while gathering or in chests. See the Cards section for more information.

Levels will generate the same way as dungeoneering floors. Players can find prayer altars, which function the same as in dungeoneering, and chests which contain cards. There are also summoning obelisks, furnaces, farming patches and spinning wheels, which are essentially cosmetic as they are not needed for the game.

You will see a panel as soon as you enter the sinkhole. On the panel there are several pieces of information available: 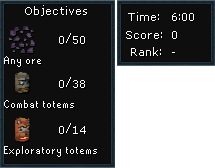 The panel shown in the gameplay.

Note that the panel only shows the materials that have already been deposited - other players may already be holding the resources to fill the maximum. When required amount is reached, a tick appears next to the quota.

The following monsters can appear with varying levels. None have any weaknesses. Their only drops are combat totems (always) and cards (randomly, approximately 1/8 chance). Monsters rarely appear at the highest levels - the lower range is more common.

Certain raw resources have a particle effect around them. Fishing spots will be blue, ores grey, plants green, and trees an orange-brown, which is often hard to see. These raw resources yield double when harvested, so it's important to try to find these.

When all players gather in the treasure room, they will be ordered according to their rank. 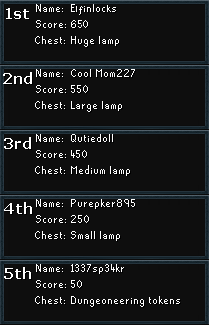 The panel shown in the treasure room.

There are five possible rewards: huge lamp, large lamp, Medium lamp, small lamp, and Dungeoneering tokens. The huge lamp starts in the treasure box of the top-ranked player, and the treasure boxes containing the other rewards are randomly arranged among the remaining players. The items in each treasure box can be read from the panel on the top left corner. See Rewards section for more information.

Each player is given one turn to use cards obtained, starting from the fifth player. When all players finish their turn, rewards are given in inventory and they can leave by the ladder. Players can choose to spawn at the sinkhole entrance, or go back to Daemonheim. It is possible to enter the same sinkhole again if enough time remains.

If you log out in the treasure room then you may or may not get a reward and a daily turn will be used.

Cards are randomly found within the dungeons under totems, while gathering resources or from locked chests. Cards have no use before the treasure room. You can only carry up to five cards, which will include duplicates. Cards can be destroyed but not dropped, and all duplicates of a card can be chosen for destruction at once. Players can have multiple cards on hand but only one can be activated at the end. Each player will have one turn to choose which card they will deploy, starting with 5th place and finishing with 1st place. The chosen card summons the corresponding creature to give out their special effects. There are eleven types of card: 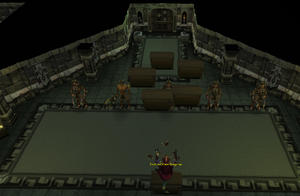 In addition to any experience from combat and resource-gathering activities during the game, the rewards available are: