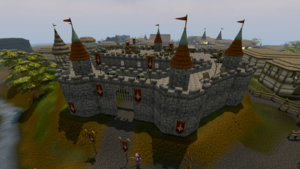 The front of the castle.

Ardougne Castle is a castle in East Ardougne near the border to West Ardougne. King Lathas was king of Kandarin until Plague's End; after this quest transpires he will be replaced by his cousin, King Thoros, who resides on the 1st floor[UK]2nd floor[US]. Players can start the quest Underground Pass here. Aside from the king, many Paladins wander the area around it.

There is a chest that gives you 1,000 coins, a raw shark, adamantite stone spirit and an uncut sapphire when you picklock it. Bear in mind that you need to picklock the door as well, and search the chest for traps to avoid damage. There are two both on the same floor. It requires 72 Thieving.

This information has been compiled as part of the update history project. Some updates may not be included - see here for how to help out!
Retrieved from ‘https://runescape.wiki/w/Ardougne_Castle?oldid=35753726’
Categories:
Hidden category: