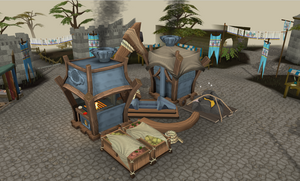 The preparation station for the Gielinor Games.

The Gielinor Games Preparation was the event leading up to the Gielinor Games, taking place from 11 July 2012 up until the games were released on 24 July 2012. Each day, all players could assist foreman Oomad Arrow, located on Varrock square, in making food and medals for the games, and members could help make Construction materials.

Level 40 in Cooking, Mining, Smithing, and Construction allowed one to create the highest possible items for Oomad. 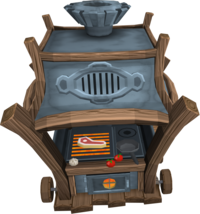 Speak to Oomad and ask to make food. He'll request a dish with a combination of three flavours. Go to the Gielinor Games kitchen and try to make the dish.

Once cooked, hand the Gielinor games food to Oomad by using it on him, which awards some contribution points, up to 20 per dish (depending on his request), in addition to some Cooking experience. Up to three dishes can be made per day.

The best method in order to obtain maximum points on the cooking portion is to select every food and only choose ones that give six or seven points. If there are only three or two six-pointed foods try to obtain ones that reward five points instead. Try to fill up all four/three/two slots and to get 23 points or above. 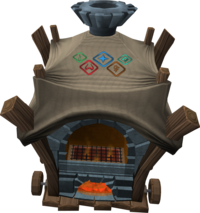 Oomad requests 7 medals, with the metal type depending on your Smithing level. To make the medals, you'll first have to mine some nuggets from the Gielinor Games scrap pile near the forge. Use the best pickaxe available, as it takes a while. You need 2 nuggets to make 1 medal, so a total of 14 is required.

After you have all the scraps required, use them on the nearby Gielinor Games forge. Hand the medals to Oomad.

You can hand in more than 7 medals, up to 27 medals (maximum number of medals you can put in your inventory) but receive no extra contribution points for doing so.

You need 20 mining and 20 smithing for Oomad Arrow to ask you to make silver medals.

You need 40 mining and 40 smithing for Oomad Arrow to ask you to make gold medals.

Upon bringing Oomad gold medals, you will receive 60 contribution points.

The same process is used for the construction materials as for making medals, although it is members-only. Oomad asks for seven of one of the materials. Mine nuggets from the scrap pile, and use two of them on the forge to make either bricks or metal girders.

Experience rewards are given for each activity:

Oomad has a shop interface that sells equipment in three tiers: bronze, silver and gold. The shop was unavailable until the Gielinor Games actually opened.

The currency in the shop is contribution points. Players gain contribution points for each of the preparation activities to which they contribute. A maximum of 174 to 180 points is available each day for members, 60 points from medals, 60 points from construction, and 54 to 60 (depending on luck) from catering. A maximum of 114 to 120 is available each day for non-members.