The 2018 April Fools' event consisted of in-game joke items, the ring of random and the ring of rares, and a spoof video. Mod Lee also hosted a cow mass that would reportedly drop a rare cow staff.[1] 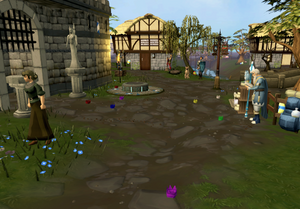 During the event, white, red, yellow, green, blue, and purple partyhats spawned at the following locations around Gielinor:

A rare cow staff item was reportedly a possible drop from cows during the event. At 13:59 UTC, the following in-game message was shown:

Join Mod Lee right now for a cow mass at http://twitch.tv/Runescape now, join in for a chance at the elusive Cow staff! Meet at the Lumbridge lodestone on w37. FC: Mod Lee

Mod Lee stated the item had a very low drop rate, which would change to a drop rate of roughly 1/200 during the livestream on 1 April 2018.[2] This caused many players to set up Oldak coils and Dwarven multicannons in cow fields to try and obtain the staff. He later stated during the stream that the item, along with the yak staff, is non-existent.

A rare yak staff item was reportedly a possible drop from yaks during the event. It was said to be more rare than the cow staff. [3] Like the cow staff, Mod Lee reported that it was fake.