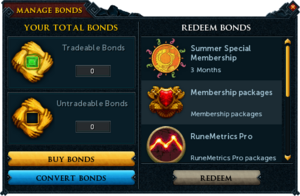 Players who were Gold Premier club members, who subscribed using the Summer Special membership promotion, or who previously owned the Enlightenment aura received the Illumination aura on 1 June 2016. This could be activated daily to give 10% bonus experience for an hour. There was a highscore for the base experience gained while using the aura. The aura remained usable until 9 September 2016.

Each month, between June and September, players could claim and enter Summer sweepstake 2016 tickets into a raffle by talking to Balthazar in Burthorpe. The amount of tickets that could be claimed increased with each month of consecutive membership the player had during this period. A small XP lamp was received for each ticket the player entered into the raffle. Prizes were drawn and could be claimed at the end of each month. For the month of September only, there was a chance to win a trip to Jagex HQ as a raffle prize. September's regular prizes could be claimed from the beginning of November. Ironman players could claim tickets, but could only enter their tickets in September. They received small XP lamps for doing so.

This information has been compiled as part of the update history project. Some updates may not be included - see here for how to help out!
Retrieved from ‘https://runescape.wiki/w/Summer_of_Adventure?oldid=35690402’
Categories:
Hidden category: