The Lumbridge Rebuildathon was an event released on 30 October 2013 in lieu of a typical Hallowe'en event. The event was removed on 13 November 2013, two weeks after its release.

In the event, players were able to help Foreman George and his crew builders rebuild Lumbridge after the devastation caused by Zamorak and Saradomin fighting in the Battle of Lumbridge. Players also helped them dismantle the camps left by Zamorakians and Saradominists.

The interface that displays the contribution, the progress and resources needed.

Locations of the resources 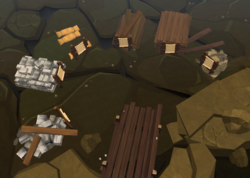 Resources were obtained from around Lumbridge, although the player was limited to collecting 1,500 resources every day. Resources were then handed to Foreman George or one of the other builders in order to contribute. Excess resources that were not needed were stored in stacks located within the Lumbridge crater, to the west of Foreman George. Storing supplies in the stack did not contribute towards the needed resources, although it did give points, albeit less than if given to one of the builders.

Resources in the stack could be claimed by all players who have not met the cap and given to the builders, provided that the stacks were not empty. Resources taken from the stack gave less points when given to the builders than when gathered from elsewhere, meaning that the daily cap was reached slower, allowing players to contribute more resources towards the rebuildathon per day. Players solely interested in points gathered supplies from elsewhere.

The rebuilding of Explorer Jack's house began on 30 October. On 31 October, the rebuilding of Explorer Jack's house had reached step 11, but progress was reset to step 1. No official reason was given by Jagex for the reset. The house was completely rebuilt on 4 November. Jack remarks that the house is perfect, and that he requires a carpet and a few decorations for his house. The north-western portion of the Lumbridge Castle wall was also repaired.

Upon completion of this stage, a reward was unlocked: the replica of Explorer Jack's helmet. The reward was claimed from Foreman George.

The rebuilding of Hank's Fishing shop Lumbridge Fishing Supplies began on 4 November. The shop was completely rebuilt on 7 November. Hank remarks that the house is perfect, and that he needs to restock and fill his shelves with goods. The north-eastern portion of the Lumbridge Castle wall was also repaired.

Upon completion of this stage, a reward was unlocked: The Architect emote. The reward was claimed from Foreman George.

The rebuilding of the Lumbridge General Store began on 7 November. The store was completely rebuilt on 10 November. The Shopkeeper remarks that Foreman George and his team of builders had patched up the damage to the store perfectly. The south-eastern castle walls were also repaired.

Upon completion of this stage, a reward unlocked: The Builder title. The reward was claimed from Foreman George.

The progress meter which tracks the contribution for the memorial, stuck at 0%

On 2 November 2013, during the RuneFest 2013 event, a new memorial for the fallen combatants of the Battle of Lumbridge was being built in Lumbridge. This memorial was a chance for RuneFesters and in-game players to collaborate.

Until 13 November, a memorial tent was located next to Foreman George, stating the memorial is being "built away from prying eyes" under the tent. Resources in the form of reclaimed stones could be deposited to Builder Bob, right outside the memorial tent. The contribution of the memorial was shown as a progress meter on the status board, which remained at 0% the entire day. Contributing to the memorial yielded more contribution points, to a maximum of 1,500 in addition to the daily limit, and thus more experience.

It was announced that if the memorial was not completed by the end of 2 November 2013, then it will remain incomplete. It is assumed the lack of movement in the progress meter was indicative of a glitch, which could have made the memorial unbuildable.

On 13 November, the memorial was unveiled as a fountain.

The battlefield camps used by both Saradominists and Zamorakians during the Battle of Lumbridge were gradually dismantled. Wooden footpaths, tents, barricades and spikes were salvaged from the camps to be used as resources for the event. The Saradominist quartermaster and the Zamorakian quartermaster remained within their camps until the end of the event. The pedestals on which the gods stood, the tower gateways, and the crater itself remain. 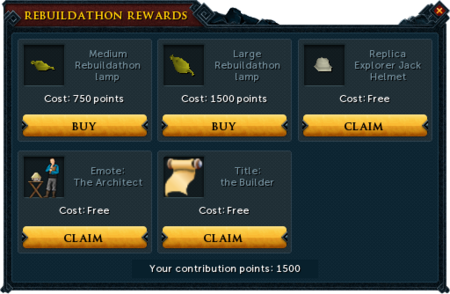 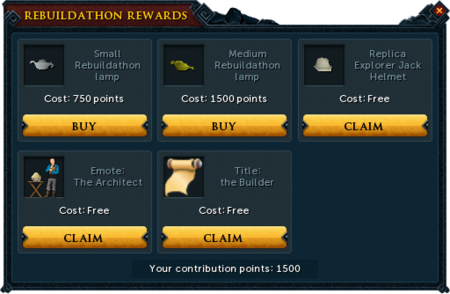 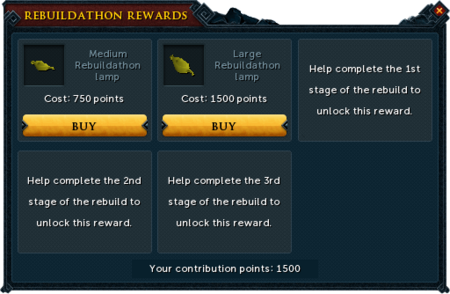 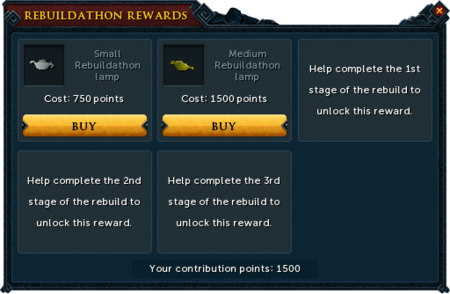 Many players had reported in the RuneScape Forums of experiencing extreme lag while in the event area, especially near Lumbridge Castle and Foreman George. Some players had dubbed the event "Lumbridge Lagathon" due to this lag.