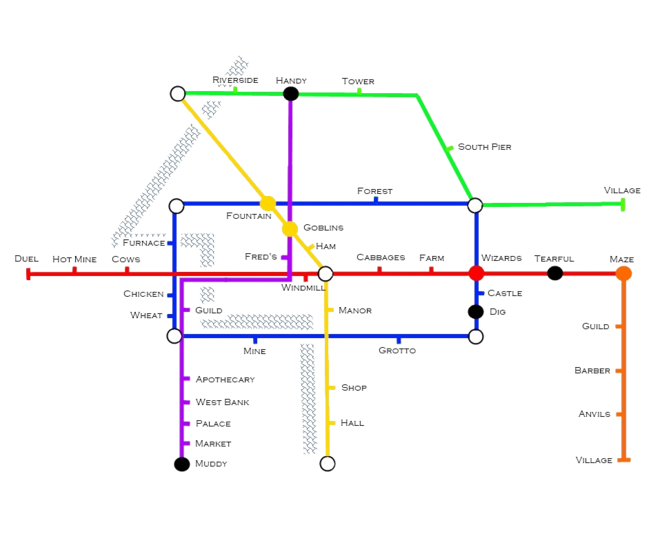 Mod Timbo had invited 6 of the most prominent figures in all of RuneScape to a garden party, giving them time to relax in the sun with Wizard Mind Bombs and a buffet of freshly caught seafood from the coast of Catherby. Unbeknownst to each of Timbo's guests, it was a ruse in order to blackmail each of them into giving up their rare items without having to fight them first! Timbo had acquired secrets about each, they were:

Nomad - What people think is Nomad is actually a scheming Dwarf called Honeydew inside a mechanical suit
Nex - While she was young, she practiced the ways of Saradomin before converting to Zaros
Lucien - Only stole the Stone of Jas to impress a lady and it all suddenly got out of hand, but he needed to continue impressing her
Wise Old Man - Uses magic to convince everyone that he's old when he's actually only 24 years old
Lord Drakan - Has hidden himself from public view due to him enjoying Twilight and being unable to face another since
Bank Clark - Using his inner knowledge of the Bank of RuneScape system, he has been siphoning off cabbages to fuel his addiction to the delicious vegetable

Aghast with this news, each of Timbo's guests was filled with anger and embarrassment. Not wanting to cause a fuss at such a prestigious party, they each decided not to give Timbo a present that they were planning on presenting at the end of the evening. Using their combat abilities would have been too easy, but the denial of presents was something that they thought would definitely hit the right spot. The withheld presents were:

Nomad - An Iron pickaxe, the exact pickaxe that dug all of the underneath of Soul Wars
Nex - An Uncut sapphire, one of her favourite gemstones
Lucien - 10 Body runes, Lucien always thought a Disruption Shield would be useful in dire needs, but wanted to give them out to a good friend
Wise Old Man - A Cowhide, a reminder of the 'good old days' of Gielinor
Lord Drakan - A Meat pizza, not quite the diet of Vampyre lords but delicious nevertheless
Bank Clark - A Cabbage, as part of his Cabbaholic Anonymous program he needs to handle them without eating one

The party carried on; guests and Timbo alike drank Gnomish cocktails and continued to eat specialty Rabbit sandwiches from Burthorpe. That was until three blood-curdling screeches could be heard from inside of the mansion. "Murder!" the waiter cried, "Murder in Timbo Mansion!". It was true, three people had been killed and only the guests could be to blame! Timbo gathered everyone, staff and guests included, at the Garden Party area for an emergency meeting. "Friends and guests, we have a murderer loose amongst the house!" Gasps came from all present. An elderly maid fainted in the background. "I am afraid to admit that we do not know who or where these murders were committed. We're bringing in a crack team of investigators who will be able to solve this. Bring in... THE PLAYERS.

Clue 1:
We hear the prenom of Robert from 802 for this offspring. (3)
A shortened friendslist which is initially under royal oath ambiguously is milled. (5)
This drink is fit for a thousand Empress of England who is missing mad Mat, but has the K. (4)

Clue 2:
Aethelred roughly lost his quick elemental shield in this stitch up. (6)
Point north east as these eight kings take fifty east. (6)
Particularly tough Aethelred without Edward about for this armour. (4,7)

Clue 3:
Fifty opulent Georges initially a bit wooden (3)
Like copper the 500th Queen fights with fists for this firemaker (9)
This great can't read about the start of our own royal ground (6)

After solving all five clues, talk to Essjay, and a cutscene will show The Queen's arrival.

Then you will be able to claim the following rewards from Big Ben:

You can also get the rewards from the previous 3 Cryptic Clue Fests. You can get all of the previous rewards by talking to Avalani who can be found at the Clan Camp near Falador, or Roddeck in Lumbridge. These items are 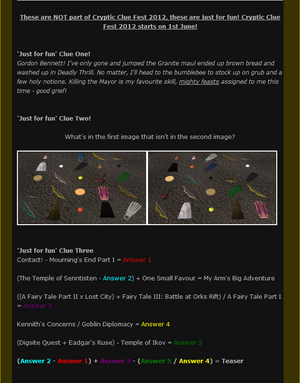