RuneFest 2014 was the second RuneFest to be held at Tobacco Dock, in London (50 Porters Walk, London, Greater London E1W 2SF).

RuneFest tickets costed £99 each. This was also the first year that tickets could be bought with bonds.

Accommodation at the nearby Grange Tower Bridge Hotel could also be bought through the use of bonds. Few international players were also able to book flights to London via bonds. 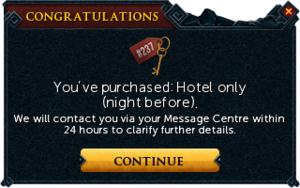 RuneFest 2014 also saw the introduction of crystal coins, a currency available to use at RuneFest, bought with bonds.

Attendees received a goodie bag upon arrival, which included:

There was a merchandise stand with RuneScape and RuneFest items to purchase:

8 skilling chips were available by completing various tasks around the venue. Upon collecting all of the skill chips, a Seren chip could be retrieved from the Bank.

The after party included a balloon drop, and entertainment from illuminated drummers and jugglers.