From the RuneScape Wiki, the wiki for all things RuneScape
Jump to navigation Jump to search
For the right-click function, see Drop. 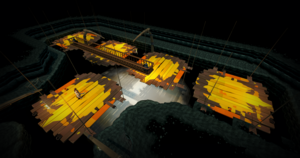 The Drop is an in-game event in which players have to answer RuneScape related trivia in order to complete the quiz in exchange for rewards.

The Drop: 2020 Edition is a version of the Drop which was added as a charity incentive. For every player that partook in this Drop one or more times, Jagex would donate £1 to one of their charity partners, up to a maximum of £34,500. This version has 12 questions total. To participate, you must join by talking to Charity at Burthorpe during the subscription time, which is during the first 2 minutes of a Drop instance. Each Drop instance starts at XX:00 and XX:30 game time, and is advertised with the message:

News: The Drop is open! Talk to Charity in Burthorpe to participate. We will donate £1 each time you play, up to a maximum of £34,500!

Ironmen only receive the title and will not receive any lamps or stars.

Once the rewards are claimed, The Drop can still be played, but no further rewards are given. 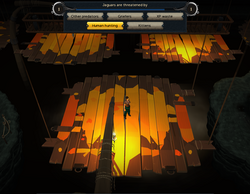 The Drop: Big Cats Edition was a special version of The Drop quiz, released in a partnership between Jagex and the World Wide Fund for Nature charity. Rewards included titles and feline companion pets. The Big Cats quiz started twice hourly – on the hour and at half-past. Answering questions correctly earned points, which could be used to adopt companions and unlock titles. A maximum of 12 points could be gained in the first week, with one point given per correct answer, and during the second week, the points were doubled. These points could be spent at the Big Cats Sanctuary reward shop, operated by Conservationist Rohit Sharma. 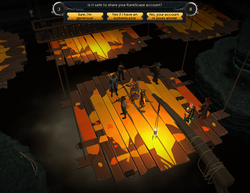 The Drop: Customer Support Edition was a special version of The Drop quiz, released during the annual international Customer Service Week.

Mod Kelvin could be spoken to start the quiz in 2015; Count Check filled the role in 2016, 2017 & 2018. Questions were timed and always in the same order, with one point awarded for each round that is completed. Getting a question wrong or failing to answer in time eliminated the player from the quiz. Winners could leave via the exit sphere.

The questions contained within the quiz were written by Mod Kelvin, Mod Infinity, Mod Chelle and Mod Tron.

In 2015 the rewards were a limited edition title, [Name] the Knowledgeable, and a large XP star.

The Drop: 15th Anniversary Edition was a special version of The Drop quiz about the history of RuneScape, released during the 15 Year Anniversary Celebrations. It could be found by talking to Fame at the celebration area north of Falador, east of the lodestone.

The first Drop was a livestreamed event via Twitch, hosted by Jagex, where players could win prizes for being the last person standing, or after 50 questions have been answered correctly. Players who had answered the questions incorrectly would be dropped out of the game and placed in the spectator's area, where they could leave the game or continue watching until a winner was decided. Winners could leave via the exit sphere that appeared at the end. Players get into the game via talking to a JMod clone, which appears for 30 seconds.

The event was first livestreamed on 18 January 2015, where two separate games were played on five worlds. The first game had a reward of either Gold Premier Club membership or a Bond if the winner already had subscribed to the Premier Club. The second event that was played had a 1,000,000 entrance fee, was limited to 500 players and contained a prize of up to 500,000,000.

Due to server lag, many of the players that weren't eliminated yet lost their connection, which automatically dropped them from the game, which meant that they could no longer win the prize. This caused players who had lost out to start a riot in world 66 where they demanded to be refunded the entrance fee. A day later, Mod Jon posted on the forums that the entrance fee would indeed be refunded to everyone who participated.[1]