From the RuneScape Wiki, the wiki for all things RuneScape
Jump to navigation Jump to search
The Old School RuneScape Wiki also has an article on: osrsw:Darkmeyer

Darkmeyer is the capital of Morytania. It is located in the Sanguinesti region, next to Meiyerditch; the two appear to be twin cities, with Darkmeyer making up the northern half of the region and Meiyerditch the southern half. It is mainly inhabited by vampyres, but some humans(many of them prisoners) can also be found there. Darkmeyer is home to an ancient and powerful tree, the Blisterwood Tree, which is capable of doing great harm to vampyres. The tree is found on the upper tier of Darkmeyer in the arboretum building, where the vampyres have made many unsuccessful attempts to kill the tree. Partial completion of the quest The Branches of Darkmeyer is required to access the city.

Darkmeyer is hard to reach and one is required to wear the full Darkmeyer disguise to not be caught and thrown out, or the House Drakan outfit, acquired part way through The Lord of Vampyrium. It can be entered by climbing into a hole in the very north-east of Meiyerditch, but can also be teleported to using Drakan's medallion, which becomes usable after Vanescula Drakan enchants it during The Branches of Darkmeyer. The teleport will put one in the Arboretum.

The city was founded and ruled by Lowerniel Drakan. At some point Drakan departed, leaving the ruling of Darkmeyer and the Sanguinesti region to his siblings, Vanescula and Ranis Drakan. Near the end of the Fifth Age a member of The Myreque, a human resistance group operating in Meiyerditch and nearby Burgh de Rott, infiltrated Darkmeyer using a vampyric outfit as a disguise, with the assistance and knowledge of Vanescula Drakan. This human was blamed for the assassination of Ranis, as well as that of the powerful and high-ranking human-born vyre Vanstrom Klause.

In the wake of these attacks, Drakan returned to Darkmeyer, calling a gathering of true-born nobles atop of Castle Drakan. During this gathering he addressed Vanescula and one of her human-born personal guards, questioning their opinions of recent events and the current state of vyre society. Drakan revealed that he knew of Vanescula's plan to overthrow him, and that several of her retinue were disguised humans bristling with concealed blisterwood weaponry. After a brief scuffle, the entire party is imprisoned in the basement of Castle Drakan.

After escaping Drakan's dungeon and finding themselves in the Vampyrium version of Castle Drakan, the Myreque and Vanescula succeeded in defeating Drakan for good. Vanescula took over the ruling of Darkmeyer at this point, being a more loved and respected ruler than Lowerniel Drakan had been, especially among the human-born vyres he had despised. She opened the Vampyrium castle's blood stores to the nobles, allowing them to feed better, and she also brought discipline to the Vyrewatch.

Vanescula also began to increase the number of vyres within the city, using the Haemalchemy learned from Safalaan Hallow to vampyrise humans, and also to infuse them with the protection of Safalaan's Icyenic heritage, allowing the vyres to cross the River Salve. Vanescula had planned to expand out of Darkmeyer and into Misthalin. Her plan was to abandon the ghetto farming of the Sanguinesti region and have vyres live alongside humans and feed on free-range blood, as they had done under Zaros. After Vanescula's defeat, with the Salve's barrier strengthened to return human-born vyres back into humans, Vanescula agrees to try another way. She agrees to co-rule with Efaritay, former queen of Hallowvale, and Safalaan Hallow, with the aim of getting vyres and humans to peacefully co-exist within Darkmeyer and Meiyerditch.

The city itself is divided into three parts:

The city itself is comparable to cities such as Falador in terms of size. Like many of Gielinor's cities, it is built in a mostly uniform style, with many of its buildings being built of grey stone, with red banners and gothic motifs common in their designs. It has within its walls one of Morytania's two altars, as well as a bank and furnace.

The area now occupied by Darkmeyer as of the 31 August update that released The Branches of Darkmeyer was once occupied by a small number of half-timber buildings with Mansard roofs, Gothic lancet windows and other unique features. These buildings were very similar to the buildings located in Meiyerditch, and it seems that they were likely intended to be the better preserved examples that were inhabited by vampyres, as an early and unfinished version of Darkmeyer. These buildings and the area they were located in were extensively reworked and replaced in the update, and no longer exist. 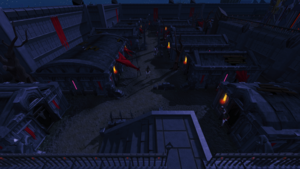 The lower section of Darkmeyer 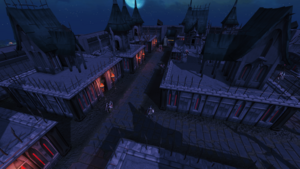 The middle section of Darkmeyer 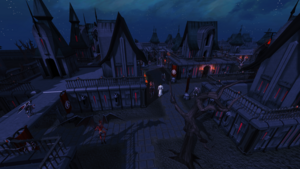 The upper section of Darkmeyer

All inhabitants can be attacked unless indicated otherwise.

Before the release of the Branches of Darkmeyer, the city was an inaccessible and mostly empty area. Near Castle Drakan stood a couple of houses, while the east was just a blank area