The Cotton Tales was the 2017 Easter event, featuring the Easter Bunny and divine eggs that contained memories of Guthix.

Guthixan butterflies were also seen all over Gielinor, like they have been with previous Easter events. The limit was once again 20 butterflies a day, as opposed to the limit of 25 that was seen during the 2016 Easter event. The butterflies were removed after the end of 23 April, while the Easter Bunny and the miniquest remained until the game update on 15 May.

This event can be started by talking to the Easter Bunny near the Burthorpe lodestone. He gives you a magical bunny notepaper which you continue to read through throughout the whole event (it functions as a quest journal). If you lose the magical bunny notepaper, you can right-click retrieve lost paper on the Easter Bunny for a new one. It's a list of gifts that his father hid. 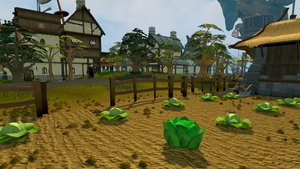 The 'Cabbage' in the cabbage farm.

Full. Of. Them. Balls. Of. Nutritious. Green.

Go to the cabbage field that is located east of Falador farmhouse. The quickest way is by using the cabbage teleport on an Explorer's ring 3 or better. There is a smaller, greener cabbage near the south gate which will have the "talk to" option. Speak to this 'cabbage' to learn that it wants a bucket of compost, a bucket of water, and cooked shrimps. Once gathered, the cabbage requests they be mixed together. The 'cabbage' hands over the divine egg (cabbage) into your inventory, click on it to view a lore dialogue with Guthix speaking of Brassica Prime. You must go through all the dialogue of the egg before you can continue on the quest. 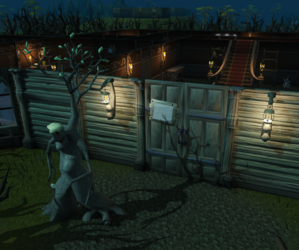 Dead. Wood. All. Around. Scary. House.

Travel to Draynor Manor (go north-east from the cabbage patch and pass the shortcut to Manor or home-teleporting to Draynor, then walking north). Dave the giant ent is standing at the entrance of Draynor Manor. After listening to the Ent's puns, which you started to get tired of, he requests a normal log and 10 potato seeds.

Bring the items to Dave, and he'll hand over a divine egg (ent). It contains dialogue of Guthix mourning about the trees and ents being cut down for cities. You must go through all the dialogue of the egg before you can continue on the quest. 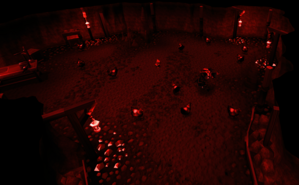 Catching chicken for a dwarf

Deep. Down. Deeper. Than. That. Watch. For. Low. Roof. Hammerspike.

Find Hammerspike Stoutbeard inside the westernmost area of the Dwarven Mine. The quickest way to get to the Dwarven Mine is with Disk of returning or you can teleport to the Falador lodestone and then travel north-east. East of him are three dwarf gang members, speak to the dwarf in the hallway. He thinks that chickens have infested the space, and ask you to catch 10 chickens in favour of your egg. Right-click catch on him to enter the chicken-infested area.

Catching each chicken spawns two more chickens in the space. Once all 10 chickens are caught, the dwarf gives you divine egg (dwarf). The egg shows how Guthix felt guilty in not helping the dwarven race, causing the dwarves to turn away. You must go through all the dialogue of the egg before you can continue on the quest. 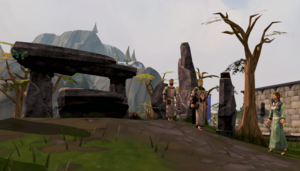 The woman in the druid circle.

Round. Of. Druids. Circle.

Get to the Taverley stone circle. The easiest way to get there is to home teleport to Taverley and walk north-east. Once there, talk to the female druid standing next to Kaqemeex. She claims that she has been "waiting" for you since she knows your arrival by a "script". She then challenges you for a "Stone, Net, Sickle" game (a more "educated" version of Rock-Paper-Scissors).

The game goes like this: Net beats Stone; Sickle beats Net; Stone beats Sickle. You will need to play a best-of-five series with the druid, after which she will give you a divine egg (druid). You do not have to win to receive the egg - the druid will give it to you regardless of the outcome. The egg plays Guthix's dialogue about Misalionar.

Return to the Easter Bunny. Much to his surprise, the final stop is the Easter Bunny itself. Wondering what gift he has, the divine egg (bunny) shows that Guthix created the bunnies to symbolise and celebrate the rebirth of life from the slumber of Winter at the beginning of Spring. 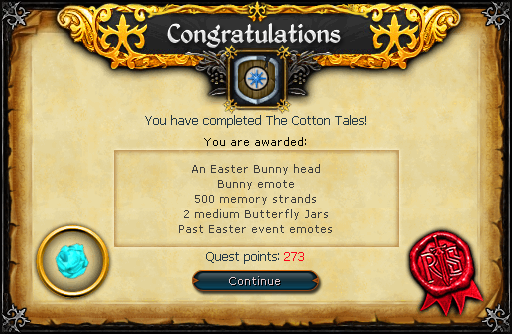 This information has been compiled as part of the update history project. Some updates may not be included - see here for how to help out!
Retrieved from ‘https://runescape.wiki/w/2017_Easter_event?oldid=35633768’
Categories:
Hidden category: