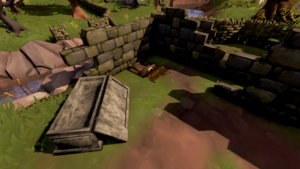 The trapdoor leading to the dungeon in Edgeville 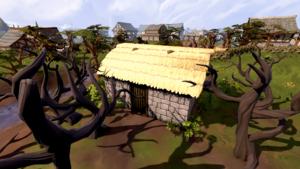 The other entrance to the dungeon, in the house near the Cooks' Guild (requires a brass key) 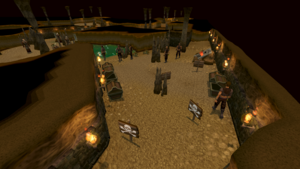 The beginning of the Wilderness part 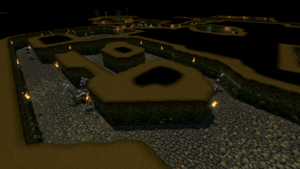 Some of the monsters in the dungeon

There are two entrances to the dungeon. The most common is in Edgeville, in the ruins south of the bank. It is marked by a

mark on the minimap.

Another entrance is west of the Cooks' Guild near Varrock on the east side of the River Lum. To get in, the player must bring a brass key which can be found in the dungeon. It is useful to players who wish to collect big bones, since it leads right down to a group of hill giants and is fairly close to the Varrock bank. Alternatively, members can use the bank in the Cooking guild, which is nearer, provided they have completed the Hard set of the Varrock tasks. 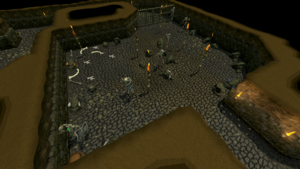 The mine that used to be in the dungeon, the rocks are now removed.