Grand Theft Cocoa was the 2020 Easter event. The event featured imps who had stolen the Easter Bunny's eggs, and the player needed to find and return them to him. The event began on 8 April 2020 and ended on 15 April 2020; eggs could not be collected, but players could still visit the event area and talk to the Easter Bunny or Caelyn to exchange their eggs for rewards.

Logging in during the event triggered the login message Mischievous Imps have stolen the Easter bunny's eggs! Collect them and hand them in to either Easter bunny or Caelyn near the Clan Camp for special Easter prizes.

During the event, the Event interface could be used to teleport to the event area. The teleport is no longer available; however, players can still visit the event area (south of Falador) to hand in their eggs.

During the event, egg thieves would appear when skilling with the message An Easter egg thief has appeared!, dropping two small piles and one huge pile (to the activating player only) on the ground. Collecting from a small pile yielded 6–19 pilfered easter eggs, and collecting from a huge pile yielded 100–149. The huge pile had a chance of yielding a jewelled egg that in turn rewarded the player with up to 200-249 more eggs.

Immediately after logging into a world, there was an initial cooldown of 5–10 minutes during which egg thieves would not spawn. After this time had passed, an egg thief would spawn every five minutes when the player skilled. Gaining experience was not required for this to happen. The imps could not spawn in certain areas such as instances, but skilling in these areas would still reset the cooldown timer as if one had spawned. 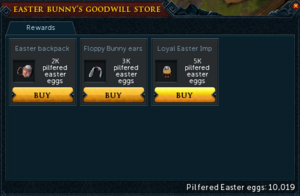 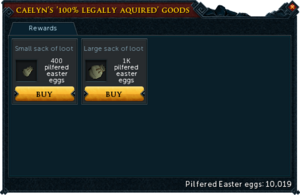 The rewards in Caelyn's '100% Legally Aquired' Goods[sic] shop could be bought any time during the event (even after unlocking all the other rewards) by non-Ironman Mode players.