A Stray in a Manger is the 2012 Christmas holiday event. In the event, the player must help their snow imp, who has become Santa Claus to the pets of Gielinor. On the advice of the snow imp, players find stray dogs who want to have a new purpose as their Christmas wish to help power the snow imp's sleigh.

Speak to the Snow imp near the Draynor lodestone, which is north of the village. If you already had a snow imp from earlier events, it will be the same imp - with the 'Claus' title, otherwise you'll receive a new one. He will explain about the different types of Christmases for different races and that Santa Claus is in a bit of a pickle, not having enough time to distribute presents to everybody. As such, he assigned different snow imps to do different races, for example elves, dwarves and even Mahjarrat imps. Your imp has become Pet Santa and is to bring presents to all the pets. He has received letters from several stray dogs, who want a home and a purpose for Christmas. He suggests that you find the four stray dogs in different cities and magically teleport them to the imp using dog antlers, where they will become Pet Santa's reindeer. You must find a stray Dalmatian in Al Kharid, a Doberman in Draynor, a Labrador in Falador, and a Mongrel in Varrock. 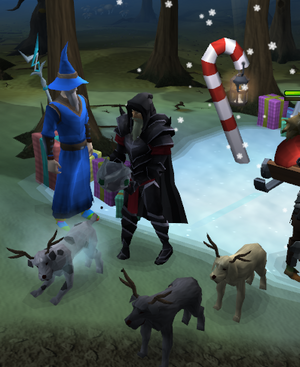 All of the dogs will be found relatively near the lodestone. Put the antlers on them and they will fly back to the snow imp.

After finding all the dogs, return to the Snow imp. He will give the dogs names. The Dalmatian is named Little 'Elper. The Doberman is named Oddie, after a scientist near Draynor. The Labrador is named Sir Chen Rescoo, because he is from Falador, home of the White Knights. The Mongrel is named Patch.

Getting the Dogs Ready[edit | edit source]

Soon after, he will whisper that they are Dragon's belly, meaning smelly. He would then like you to clean them and gives you a bucket of water for that purpose. Clean the four dogs and return to the Snow Imp. The dogs will then become reindeer for his sleigh and a cutscene will play. After a few moments, he will have the presents magically delivered and eating mince snowballs that the pets left for him.

Pet Santa gives you your present.

The imp will then ask you to choose a dog so that they can live with someone. He will suggest choosing between near Aggie in Draynor Village, outside the Party room with Party Pete looking after it, next to Gertrude in Varrock or in Al Kharid by the Sorcerer's Apprentice. He would give you a Kennel flat pack. After choosing a location, build the kennel at the kennel hot-spot. The Snow imp will appear after building the kennel and say you deserve a present. He will then give you a genuine Santa beard followed by regurgitating a Gift of Giving (active), which can be traded with other players for customisations to the kennel. 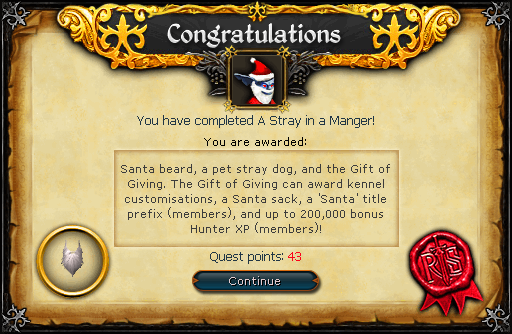 With the exception of the santa sack, all rewards from the gift of giving may also be obtained by catching Snow implings. 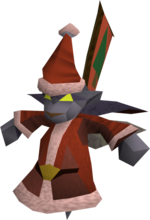 Members can catch snow implings appearing in certain areas around RuneScape, such as around Draynor Village and Varrock. Catching a snow impling will give a festive item, including Kennel customisations. It is also possible to catch named implings (see below) - these will be received as loot just like any other item.

The Snow Imp is looking for four snow implings, named Petey, Susy, Eddy and Lucy. These may be found by either trading Gifts of Giving or by looting Snow implings. Members can take the four implings to the snow imp to receive up to 200,000 bonus Hunter experience - 50,000 experience for each.

The bonus experience is not awarded immediately. It is instead distributed as the player gains Hunter experience through training in the form of a 100% experience bonus. All implings are obtainable by opening Gift of Giving (active) or by catching snow implings.

Unlike the previous year, decorations throughout Gielinor were scarce. Only Lumbridge, Varrock, Falador and Al Kharid received minor decorations in the form of decorated pine trees, presents, wreaths, and snowy trees.