From the RuneScape Wiki, the wiki for all things RuneScape
Jump to navigation Jump to search
Not to be confused with Winter Weekends.

Upon completing the event (killing both Hati and Sköll) players had the opportunity to obtain Hati paws, Hati head, Hati Cloak and Sköll boots. There was only an 80% chance of each drop (except the boots, which had a 60% chance drop rate), so players may have to kill Hati or Sköll more than once to obtain every reward. 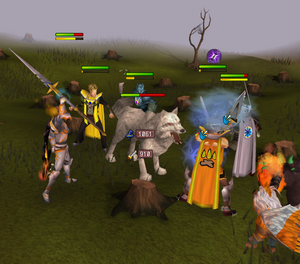 After talking to the citizen in front of Rellekka, players could now search for and kill Hati. He has three spawn points to the east of Rellekka which are scattered from the north to the south of the area. It wasn't hard to find any of these spawn points for Hati, as there were likely many players waiting at each spawn point to kill him.

The best tactic towards finding Hati is to stay in a single spawn location and wait until Hati spawns there. It is not recommended to run to another spawn when told that he has spawned, as the large amount of players there had probably already killed him.

After being killed, Hati would re-spawn in several minutes in another one of his three spawn points. He will be slain fairly quickly so make sure you attack him as soon as possible to make sure you have a chance at getting a reward.

Hati is a level 654 wolf. He will always drop wolf bones, and has an 80% chance of dropping each piece of clothing (Hati paws, Hati head and Hati Cloak), which are either all dropped at once or not at all. As long as you did at least 1 life point of damage you had the same chance of receiving the drop as everybody else. 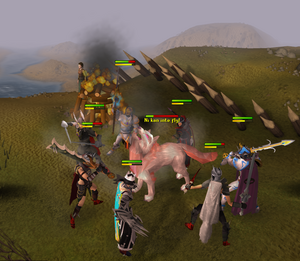 She wishes to summon Sköll when he is at his weakest in order to defeat him and rid the Fremennik of his threat for good. By doing so, she hopes to show the wolf brothers that the Fremennik cannot be bested at any time of year, thus deterring the brothers from attacking the citizens. To summon Sköll, Vitharr advises the player to build a bonfire as intense as the sun, so that Sköll is drawn to the realm to investigate.

Venture around this area and cut as many trees as you can to collect wood. It doesn't matter what kind of trees you cut as any logs will work. Once you have as much wood as possible, go back and add it to the fire. When the fire is at it's biggest, Sköll will spawn.

Sköll is a level 672 wolf. He will always drop wolf bones, and has an 60% chance of dropping Sköll boots as well. As long as you do 1 hit point of damage you have the same chance of receiving the drop as everybody else. Make sure you attack Sköll as quickly as possible as you will be surprised at how quickly so many players can kill him. World 2 usually had a lot of people waiting to kill Sköll. 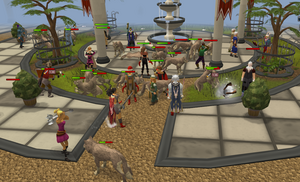 During the 2012 Winter event, Jagex Moderators had the ability to randomly spawn packs of Fenris wolves around RuneScape. These wolves were mainly level 70, but have been occasionally seen as level 64. The Fenris wolves would always drop Wolf bones and Fenris wolf pelt, but also had a rare chance of dropping Charms and Starved ancient effigies. The main place that Jagex Moderators spawned Fenris wolves was around the Grand Exchange in Varrock.

The charges on both the Hati paws and Sköll boots only lasted until 16 May 2012, as stated in the official update. After that they became purely cosmetic.