From the RuneScape Wiki, the wiki for all things RuneScape
Jump to: navigation, search
Not to be confused with Statue space (Chapel).

God Statues is a Construction-based monthly Distraction and Diversion. The aim is to aid Copernicus Glyph in building up to five statues around Gielinor which act as prayer altars.

To take part, one of the following must be completed:

To begin, speak to Copernicus Glyph who can be found in five major cities: Canifis (near the lodestone), Gu'Tanoth (just south-west of Yanille), Lumbridge (just west of the Lumbridge cow field, Prifddinas (in between the Amlodd and Ithell districts, directly west of the Tower of Voices), and Taverley (near the stone circle). Select a statue depicting a notable follower of one of five gods (Commander Zilyana for Saradomin; Juna for Guthix; K'ril Tsutsaroth for Zamorak; General Graardor for Bandos; Glarial for Seren) to be built then help erect the scaffolding. 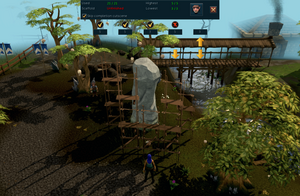 An in-progress piece of scaffolding work. Three are correct and one is incorrect.

Copernicus will decide the total amount of scaffolding, as well as the minimum and maximum heights of any individual scaffolding pillar. There are five scaffolding spots, and pieces can be added or removed by using the arrows at the base of each pillar. Once the maximum number of pieces are in place, click on Copernicus' portrait, and he will inspect the scaffolding positioning and tell the player if any pieces are right or wrong. He will always comment on all correct pieces in addition to one incorrect piece, so any pillars he doesn't comment on are incorrect. When all the scaffolding is correct, his portrait will glow green and work will begin on the statue.

The quality of the statue vary dependent upon the builder's Construction level, while the fanatic depends upon the area and the builder's Slayer level. Boosts such as the crystal saw do not affect the statue quality.

Every month, fanatics succeed in destroying the previous statue, allowing them to be rebuilt on the first day of each calendar month. It is recommended to do this, especially for ironmen. 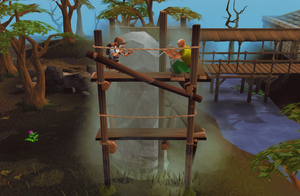 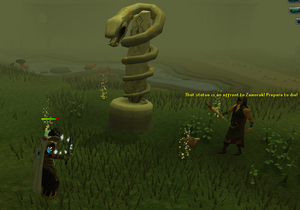 If the wrong god statue is built at a place where another god is worshipped, a fanatic aligned with that god will appear and will attack the builder when they pray at the statue. Should a player flee the scene, they must wait 1 minute before they may attempt to fight the fanatic again.

The sculpting chisel is a Construction tool that is earned by building a statue to a god in the same location for four months, which can be non-consecutive. There are five chisels, one dedicated to each god, though the difference is purely cosmetic. The chisel provides an invisible Construction boost of one level which stacks with other boosts such as the crystal saw, spicy stews, and tea, and grants an additional 1% experience gain while training Construction.