From the RuneScape Wiki, the wiki for all things RuneScape
Jump to: navigation, search
See also: The Land Out of Time 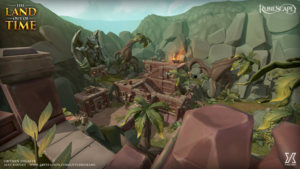 Orthen, which means "first city" in the language of the Dragonkin according to Charos, is a city on Anachronia.[1] It is the first home of the Dragonkin on Gielinor after coming out of hiding from the Abyss following The Great Revision by the Elder Gods.[2]

The Dragonkin that settled on Orthen debated about their situation with the Elder Gods. Kerapac, a Dactyl fledgling at the time, wanted to fight the Elder Gods by using an animasphere that generated shadow anima, which was toxic to the Elder Gods. Without the approval of his fellow council members, Kerapac activated the animasphere, which in turn caused Jas to manifest and completely destroy Orthen and bind the Dragonkin to the Stone of Jas.

After acquiring the Needle during the events of Desperate Times, Kerapac flew to Orthen, where he used the Needle to pull a version of Orthen that was destroyed shortly after the Dragonkin were cursed, but before his animasphere device was destroyed. Orthen predates Guthix's arrival to Gielinor, and is so old that at least one dragonkin believed it to be a myth.[3]

Orthenglass, a material created out of crystallized dragon breath, was likely named after the city.

There are three known locations of Orthen. The Anachronia base camp is built in the central ruins that was the bazaar. The Nodon Hibernatorum is located in the northeast ruins. The Eastern ruins with the pool is where the Kindra Council took place to discuss matters about their survival and the Elder Gods.

At RuneFest 2019, an Orthen Dig Site was announced; it will be part of the Archaeology skill upgrade to be released in the second half of 2020.