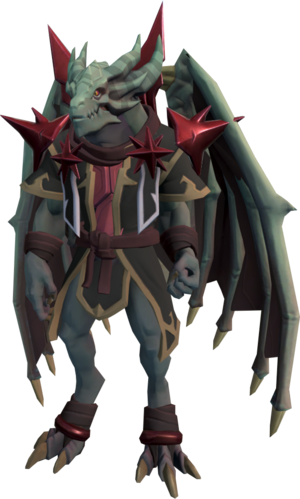 The Nodon (/ˈnoʊdɒn/ NO-don) are a dragonkin faction that was active on Orthen before the dragonkin were bound to the Stone of Jas. They were primarily builders and architects.[1][2]

When it came to dealing with the Elder Gods, the Nodon elected to build a hibernatorium in east Orthen where they could collectively enter a shared dream. The purpose of this plan was for the dragonkin to replenish the strength they had lost after hiding in the Abyss and building a city on Gielinor following the Great Revision. They believed this would be necessary if they were to do anything with the Elder Gods. While they could not reach consensus with the other factions, they agreed with the Aughra when they called for caution, and requested that the Syrtes and the Dactyl kept the council informed of their progress with their respective solutions.

Kerapac, who at the time was a member of the Kindra council and a fledgling of the Dactyl faction, did not abide by this, and built a device capable of generating a new form of energy that had the side effect of corrupting the anima. Shortly after its unsanctioned activation, an enraged Jas destroyed Orthen and enslaved the dragonkin by binding them to the Stone of Jas. In response to this, the Nodon repurposed their solution and collectively entered a state of hibernation in order to sleep through the curse. Charos noted that the magic that sustained their shared dream had a resonance similar to that of the Lunar Isle,[3] used by the Moon Clan, who would not come to exist for a few millennia.

During the Sixth Age, Kerapac used the Needle to pull the island of Anachronia forward in time from a point shortly after the Dragonkin were initially cursed. In order to learn more about his plans, the World Guardian and Hannibus located the Nodon hibernatorium and entered their dream, where Maragan and Daraval explained what happened the last time Kerapac took matters into his own hands. Meanwhile, Kerapac transported most of the Nodon to his Slancras to draw on their anima, as drawing directly from the planet would alert the Elder Gods. Kerapac did not take the elders or their caretakers out of respect. After Jas bound the Needle to herself, the Nodon Kerapac had taken were also enslaved to her as a result of Kerapac linking them to power the Needle. They were awoken from stasis and disappointed that they were still bound to the Elder Gods, but failed to notice that there was no pain from the Stone of Jas, which had since been destroyed by Kerapac.

Following the theft of eggs from the Elder Halls, Jas sent Kerapac the Nodon he had bound to him to attack Senntisten, being the first of four offensives by the Elder Gods against the mortal races. The Nodon were given siege weaponry, most likely brought in from Kerapac. Kerapac also tampered with the minds of the Nodon, given his generally poor standing among the other Dragonkin factions and the Nodon's safe approach when dealing with the Elder Gods.