Our intrepid reporters have tracked Professor Tony to the Kharidian Desert, where he met with an intriguingly familiar ally…

Once again, I find myself questioning whether I’ve let this whole project get out of hand. Yesterday morning I was greeted with a letter from Dr Nabanik, thanking me for allowing him to lead the investigation into the dig site we uncovered north east of Al Kharid. The only problem is, I don’t remember telling him any such thing - in fact, I had rather hoped to lead the charge on this one myself and have a little adventure for once.

There’s only one thing to do now - I must travel to Al Kharid and explain the misunderstanding. I only hope the good doctor hasn’t gotten too carried away already…

Oh dear. Despite my reservations, I can’t deny that Dr Nabanik is doing a wonderful job. Almost as soon as I arrived we stumbled upon a pair of fascinating artefacts. If I didn’t know better, I would’ve said that he knew where they’d be buried. But that’s ridiculous, isn’t it?

The artefacts themselves were truly something to behold. The first one was an excellent example of Zarosian art, a purplish crystal bound in bands of gold. It had an odd energy to it, too. Definitely something to investigate further.

The second item was some sort of armoured mask, forged in a similar metal to the specimens we found back at our own dear dig site. I was thinking that we should start mining the ore there and crack on with some experiments when I noticed that my companion seemed somewhat subdued.

He was just staring down into the empty eyes of the mask. I think I even saw tears in his eyes. When I asked him what was wrong, he seemed taken aback – like he’d forgotten I was even there – and muttered something about ‘the fate of our people’ before stalking off back to his camp.

What an odd chap. Still, it’s good to see an archaeologist so invested in his subject. 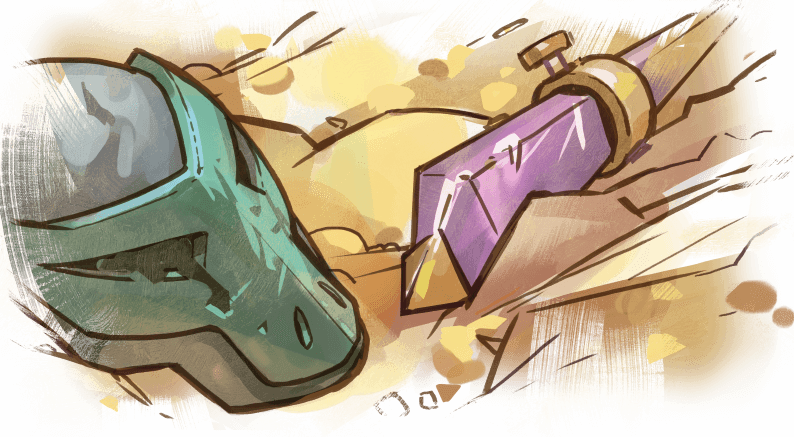 Dr Nabanik really does know his stuff! After dinner he regaled us all with legends of the desert, including a few tidbits about Kharid-et.

Like Senntisten, Kharid-et appears to have been an important Zarosian stronghold. It was here that the Mahjarrat were rumoured to have amassed powerful objects from all over the Kharidian Desert to use for their (no doubt nefarious) plans. I wonder whether any of those relics are still here, just waiting for someone to pick them up and discover their magic? I get chills just thinking about it!

Dr Nabanik went very quiet as he described the likely final days of the fortress. According to legend, Kharid-et was besieged for a great many months during the Third Age. Covered by the shifting sands, an entire fort and its people were eventually lost to time and all but forgotten. It is said that a few true believers still seek its truth, but as to their success no-one can say.

That’s when Nabanik produced an ancient papyrus, in remarkably good condition. It showed some sort of structure, not unlike a giant version of the crystal we’d uncovered earlier. Could this be the treasure we’re looking for?

The conversation then turned to our excavation plans, but I couldn’t stop pondering. What really happened to the people inside the fortress? Did they escape, do they lie where they fell, or is there a chance that something might still be down there? What exactly was the other figure on that papyrus? 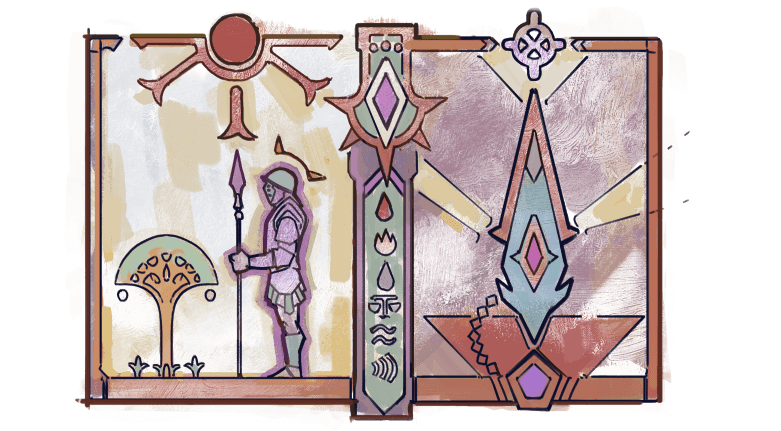 At this point the thought of Mahjarrat zombies lurking down below was giving me the shivers, so I made my excuses and retired to my tent to try and get some rest. Brr… the desert wind really is quite chilling at night.

I must leave here immediately. After what I’ve just seen I don’t think I can stay here another night! Let me try to get my thoughts in order.

An hour ago, I stepped out of my tent to see if I could find an extra blanket. On my way back from the storehouse, I noticed that there was still a light on in Dr Nabanik’s tent. I thought that maybe he was having trouble sleeping, like I was, so I wandered over to say hello. As I got closer, though, I realised that he already had company. No, that’s not quite right – I could hear him talking, but I couldn’t hear any replies.

I’m not sure why I decided to keep listening. I almost wish I’d turned around and left right then. But instead I moved closer to the tent to hear better. What I heard sent a chill down my spine.

“My lord,” said Dr Nabanik, in a voice unwholly like the friendly chap I knew, “I beseech thee, reach out to me and lend me your ear.”

I strained to hear the other person speak, but again, I heard nothing but the wind. At this point I was overcome by curiosity and crept closer, even lifting up the edge of the tent to peek inside.

“You are right, Lord. I will simply have to dig deeper.” Dr Nabanik said, and this time I could see that there was nobody else in the room. He was talking to empty space!

All of that was weird enough, but what happened next sent me packing for good. The doctor turned towards me, moving to put out the candle. I jumped back immediately – I don’t think he saw me. But his face – it was -!

No, I must have made a mistake. It was just a trick of the light.

Regardless, I think it’s the right time to leave – Dr Nabanik might be a little odd, but he’s a fantastic archaeologist, and if I did see what I think I did, he might well be just the man for this job.

I shall confess that the whole escapade has left me wondering if such adventures are a young man’s game. But I cannot possibly let my work go unfinished…

Oh dear. I do hope Professor Tony is feeling alright. Here at the Gielinor Gazette we know Dr Nabanik to be an upstanding member of the archaeological community, even if he did make his fortune selling dodgy staves.

But the information on Kharid-et seems solid, and terribly exciting! Will you be the next adventurer to uncover some desert treasure?

Stay tuned for the next Archaeology Journal, where we’ll be taking an insider look at Everlight.