From the RuneScape Wiki, the wiki for all things RuneScape
Jump to navigation Jump to search
This article is about the miniquest. For the achievement, see Helping Laniakea (miniquest) (achievement).

Helping Laniakea (miniquest) is a miniquest on Anachronia during which the player aids Laniakea to catch an elusive fish.

Embarking on an adventure[edit | edit source]

To start the miniquest, talk to Laniakea at the base camp on Anachronia and ask her about poisons. She will ask you to make a rod in order to catch a fugu. In order to create the rod, the player will need to get a list of items: shimmering feather, old spring, herby meat, immaculate jungle stick and a jungle vine.

The fastest way to collect the necessary items is following the agility course counter-clockwise and collecting the items in the following order: old spring, shimmering feather, block of stone (used to get the immaculate jungle stick), jungle vine, and ancient arbuck.

To get the shimmering feather, the player must pick it from the strange bird that can be found on the middle southern peninsula of the island.

To get the immaculate jungle stick, the player must first find the block of stone south of Laniakea's second location, down the stairs behind the slayer tower, at the south-eastern part of the island. It can be found behind the castle at south-east. Investigate the strange rock cluster outside on the ground. (While you are here, inside, east of Laniakea, is a pile of rubble containing a piece of the Totem of Navigation).

The rock can then be brought to either Eliza or Alpheus in the base camp on Anachronia (after talking to Giles and building the Town Hall (tier 1)) in order to get a dirty stick. The dirty stick can then be used on the mucky water just west of Eliza and Alpheus to get the immaculate jungle stick.

The jungle vine can be found in the dense jungle vines north-west of the eastern most overgrown idol. It is just across the northern crossing of the river beneath the big tree, in the north-eastern corner of the island. It cannot be obtained from the nearby overgrown idols.

In order to get the herby meat, the player must first find the ancient arbuck, which can be found by investigating the strange foliage east of the Herby Werby D&D entrance.

Once the ancient arbuck has been found, it must be used on a piece of raw arcane apoterrasaur meat to create the herby meat.

Regular players can purchase the meat from the Grand Exchange, while ironmen accounts will have to obtain it through Big Game Hunter.

Once both custom items have been obtained, the player needs to make their way to the Strange fishing spot, directly west of the volcano mouth, northwest of the Luminous snagglers. There, it can be fished in order to get the fugu.

Once the fugu has been obtained, return to Laniakea to give it to her and finish the miniquest. 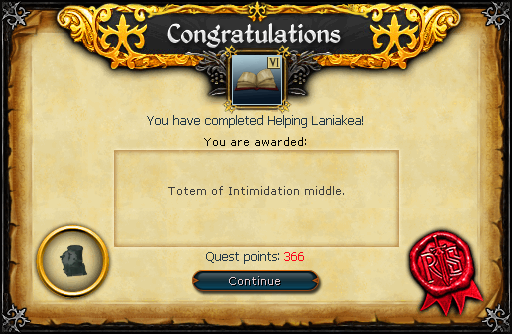 Helping Laniakea (miniquest) is not currently required for any quests or miniquests.

This information has been compiled as part of the update history project. Some updates may not be included—see here for how to help out!
Retrieved from ‘https://runescape.wiki/w/Helping_Laniakea_(miniquest)?oldid=35976431’
Categories:
Hidden categories: