From the RuneScape Wiki, the wiki for all things RuneScape
Jump to navigation Jump to search
For the livestock creature, see Pavosaurus rex (player-owned farm). 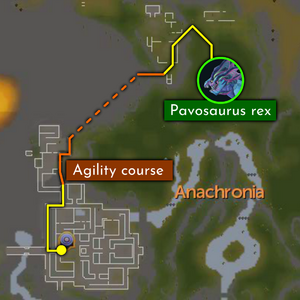 Pavosaurus rex is a tier 3 Big Game Hunter creature requiring level 96 Hunter and level 76 Slayer to catch. It is located south of the feral dinosaurs and is attracted by raw spicati apoterrasaur meat.

When hunted, it has 90,000 life points. Poison weaknesses are determined at the start of each series of encounters and will not change until the dinosaur goes into hiding. The Pavosaurus rex can not be interacted with outside an encounter of Big Game Hunter, though walking under it will temporarily stun the player.

A quick guide to hunting this dinosaur within Big Game Hunter can be found on this page.