From the RuneScape Wiki, the wiki for all things RuneScape
Jump to navigation Jump to search
This article is about the artefact at the Varrock Dig Site. For the puzzle room in Daemonheim, see monolith.
Mysterious monolith? (edit)? (edit) 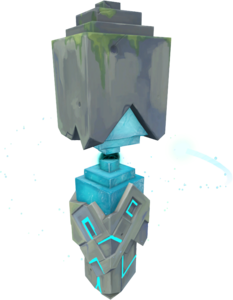 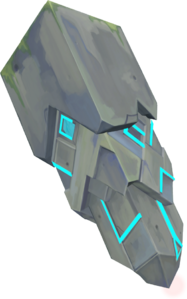 The mysterious monolith, or the Codex,[1] is an Elder Artefact found at the Varrock Dig Site. Its primary purpose is to contain the Shadow Breach on Gielinor,[2] but it also acts as a repository of knowledge and power.[1] The monolith plays an important role in the Archaeology skill, as it is where relics are activated and selected. The mysterious monolith is identified with a monolith

It was first mentioned by Jas during Sliske's Endgame and later in an Archaeology teaser, in a page from Guildmaster Tony's private journal.[3][4] Movario has shown interest in the monolith, as his energy detector led him to it.[5] In examining it, Guildmaster Tony determined that it was neither a prayer altar nor a summoning obelisk,[6] though he could not figure out what it was for or when it was from.[7]

The Codex is one of the Elder Artefacts left upon Gielinor by the Elder Gods. The abilities of the Codex are not entirely known, however it seems to be capable of transferring power and knowledge akin to the Stone of Jas. It can also absorb objects of historic significance and provide powers inspired by the object in question. Nevertheless, its original purpose was not to store information, but instead to contain rips in the universe that leaked dangerous shadow anima from Erebus.

At some point during the Time of Colossi, prior to the First Age, a great dinosaur came upon the Codex and was infused with its power, turning it into a colossus, an animal demi-god.[8] This dinosaur would become known as Raksha by the Dragonkin, which endangered their new settlement. The great dinosaur would eventually be contained and transported to Orthen, the first Dragonkin city. It is here, whilst observing Raksha, where Kerapac would begin to witness visions of 'a circle flanked by two triangles', leading him to venture West to the mainland in order to search for the mysterious shape. It has since been confirmed that the 'circle flanked by two triangles' is the Codex, and that Kerapac was not successful in his attempt to find it.[9]

During the Second Age, however, Zaros had it moved to a secret chamber deep within the Shadow Realm, in what was then known as the Grand Cathedral of Senntisten, where he attempted to experiment with it. He was versed enough with its workings at the time that he could perceive the slightest opening and forcibly close it. The Codex spent enough time hidden in the Shadow Realm that, even though it was physically removed from the Cathedral by the Sixth Age, it left a lasting impression within the chamber. Beyond that it currently resides largely at the same location from which Raksha emerged prior to the First Age. It is unknown whether Loarnab or Saradomin knew of it.

While investigating Sliske, whom they suspected of conspiring against the Empire, inquisitors Aurelius and Kolton unwittingly ran into the chamber where the Codex was kept, where a mysterious voice identifying itself as Vos drove Kolton insane. The voice came from within the Codex, and tempted Aurelius to open it in exchange for returning his dead family. Before he could give in, however, Zaros intervened and closed the Codex, quelling the voice's influence. Following the incident, and angered by the intrusion, Zaros restrained the power of the Inquisition and transferred most of their duties to the Praetorian Guard. Aurelius was stripped of his title and Kolton was sacrificed in the Mahjarrat's Ritual of Rejuvenation.[10]

Guthix had knowledge of the Codex and, at least in part, of how to operate it, as he used the shadow anima sourced from it, along with regular anima from the Heart of Gielinor to bless an adventurer, causing them to become the World Guardian.[11]

Around Year 8 of the Sixth Age, the Monolith appeared as the culmination of Archaeology's pre-release teasers. Zaros, intrigued by its rediscovery, activated the monolith. After it was activated, Guildmaster Tony used a black stone on the monolith which was provided to him by a mysterious individual named Xephos. This caused Tony to get sucked into the monolith, leaving his fate currently unknown.

A few months later, Zaros and his forces attacked the Monolith in order to claim it. He was opposed by the World Guardian and the forces of Saradomin, Seren and Crux Eqal. It is revealed that Zaros has given up hope on Gielinor, stating that "this world is lost". When Jas denied his ascension to Elder Godhood, Zaros had to seek the means to ascend in another universe, Erebus. This shadowy realm contains the toxic substance known as shadow anima, or anathema by the Elder Gods.

Zaros succeeded in opening the Shadow Breach that the Codex had sealed, travelling there to meet with the masters of Erebus, hoping they would aid in his ascension. The consequences of opening the Breach were catastrophic, as shadow cracklers emerged from the rift, threatening Gielinor. After the combined forces have an extremely difficult fight with the waves of shadow cacklers, Azzanadra decided that he had to be the one to close the Codex, as not doing so would have doomed Gielinor. Managing to close it, the resulting backlash of power, having nowhere to go but to Azzanadra, forcibly ascended him to godhood.

According to Lygrass' delusions, Xau-Tak carves its hate upon the monolith, but what exactly this means is still unknown.

Transcripts Mysterious monolith is mentioned in: