From the RuneScape Wiki, the wiki for all things RuneScape
Jump to: navigation, search
Kerapac’s deviceThe Crucible 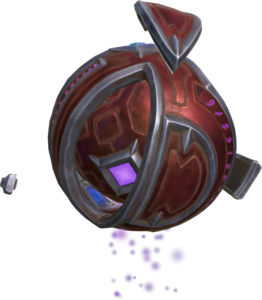 Kerapac's device, also known as the Crucible,[1] is a machine created by Kerapac, a Dactyl dragonkin, to convert anima into shadow anima. This was intended to create an unlimited power source that would be able to rival or surpass the power of the Elder Gods. It is found in Kerapac's laboratory, floating in the middle of the room.

The Dragonkin created a new civilization, referred to as Orthen, on Gielinor after having survived The Great Revision. During this time, they tried to come to terms with their previous world being destroyed by the Elder Gods, who they referred to as the ‘destroyers’, and how to either gain the favour or succeed the power of the Elder Gods. The factions set up discussions, referred to as Kindra council meetings, to discuss plans on how to deal with the Elder Gods.

Kerapac, a fledgling of the Dactyl faction, experimented with the essence of life energies that is now referred to as anima, and was able to engineer a method with the device to convert it into an opposite form of energy, referred to as shadow anima. On behalf of the Dactyl faction, he proposed using the device he created to convert anima into its shadow counterpart to create an unlimited power source, which Kerapac suggested would bring the Dragonkin civilization to the same level of power as the Elder Gods. The council discussed the use of this, believing it to be dangerous but with potential, and urged Kerapac and other Dactyl to not utilise it without Kindra approval, but to refine it further and to keep the Kindra council informed on progress.

Instead of following the Kindra council suggestions, Kerapac utilized the device to begin transforming vast quantities of anima into shadow anima. This provoked the anger of the Elder Gods, most prominently that of Jas, who viewed the shadow anima emitted by the device as a threat to the anima of Gielinor. Jas destroyed the city of Orthen and bound the dragonkin to the Stone of Jas so they would “have a purpose”.[2]

During the Sixth Age, Kerapac harnessed the power of the elder artefact known as The Needle, which allowed him to manipulate the flow of time. Using this, he reverted the frozen island where Orthen stood back to the point in time before it became what humans called “Fossil Island”, but to a point precisely before the device was destroyed, though after his people were bound[3]. This was eventually discovered by humans and referred to as Anachronia.

Kerapac began to set in motion his original plan from the time of the Orthen Kindra council to use shadow anima, though for the purpose of debilitating the Elder Gods instead of uprising dragonkin civilization. He siphoned anima generated by the sleeping Nodon dragonkin around the island, although begrudgingly[4], to have enough anima to convert at once with the device to attack the Elder Gods.

The laboratory the device was located in was protected by a black stone dragon that Kerapac used to shroud the laboratory, as it was infused with shadow anima in a way that its ‘aura’ would prevent invaders or Elder Gods from directly intervening with the device. During Desperate Measures, the player character learns that their World Guardian status is partially created from shadow anima, which allows them to survive within the aura of the dragon. The World Guardian defeated the black stone dragon, ending its protective aura. Kerapac took notice and confronted them, and was then re-bound to the Elder God Jas by a tool the Elder God gave the player. This removed Kerapac’s ability to manipulate time at will, and allowed the Elder God Ful to destroy the laboratory, destroying Kerapac’s device a second time.