From the RuneScape Wiki, the wiki for all things RuneScape
Jump to: navigation, search
The Old School RuneScape Wiki also has an article on: osrsw:Fossil Island

Anachronia, also known as Fossil Island or The Land Out of Time, is a prehistoric-style jungle island located north-east of Daemonheim.

The island features the player-built base camp, an activity called Big Game Hunter, a weekly Distraction and Diversion called Herby Werby, an island-wide Agility Course, 8 new Slayer monsters requiring Slayer level ranging from 90 to 114 (consisting of plants and dinosaurs), a new Slayer master requiring 120 Combat and 90 Slayer, and continuation of the story where the Desperate Times quest left off.[1][2][3][4][5][6]

General remembrance and most understanding of the island has been all but lost through both the ravages of time and the inequitable distribution of its raw primordial power. However, the Dragonkin once resided in a city on Anachronia called Orthen, or "First City" in human language.[7] It is unknown whether the dinosaurs, vile blooms, and ancient zygomites that inhabit the island were created by the Dragonkin or had lived there prior to their arrival. The water appears to possess special properties, as stated by various zygomites and a journal found on the island. There were also small clusters of other smaller animals, such as jadinkos and grenwalls. The Dragonkin eventually abandoned Orthen for unknown reasons.

During the Fifth Age, the Varrock Museum learned of Anachronia and called it Fossil Island, believing that an island so far up in the north would be devoid of life. They attempted to construct numerous boats to reach the island, but each one ended in failure.

During the Sixth Age, Irwinsson learned of the island through his fellow Varrock Museum friend Brodie and set sail, though he ended up shipwrecked with amnesia after he attempted to go through the stormwall surrounding the island. King Roald, believing Kerapac may have fled to the island to begin his plan to rid Gielinor of all life to stop the Elder Gods, immediately ordered the construction of a new boat, overseen by Mr. Mordaut and assisted by numerous adventurers. The boat was eventually completed and, utilising many skills, the boat managed to breach the stormwall safely.

The adventurer set off with a small expedition force to explore the island, coming upon the bones of several massive creatures. As they continued exploring, they encountered a massive creature which ambushed them, but they were saved by Irwinsson, who brought them to the ruins in the centre of the island that was safe from the natural fauna. The archaeologists began setting up a base camp from the ruins to both protect themselves and unlock new opportunities. Mr. Mordaut eventually arrived on the island himself, and, noting that island was so far north that such vibrant life should not exist on the island, renamed Fossil Island as Anachronia, the Land out of Time. 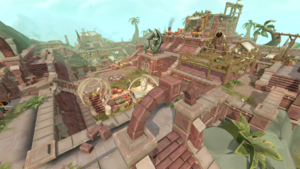 Travelling to Anachronia for the first time requires the player to use The Stormbreaker, the ship built during the Breaking the Storm event, which is located at the Varrock Dig Site. Players will be shown a cutscene the first time they travel to the island and will have to guide a group of NPCs, including an archaeologist, Laniakea, and two guards, through the island.

After traversing through the island for the first time, the methods to get there are:

After arriving on Anachronia, the player can establish a base camp and upgrade it with resources that you can assign workers to find. These upgrades can grant many passive effects that are useful in both Anachronia and the rest of Gielinor.

Players can also build a lodestone at the Base camp to connect Anachronia to the Lodestone Network.

Anachronia is a large island, and the player can travel around the island quicker by using the Anachronia Agility Course. The course is split up into seven sections, requiring anywhere from level 30 to 85 Agility to complete. As you traverse the course, there is a chance to gain one of several different totem pieces, or codex pages which can be used to create either the Double Surge or Double Escape codex and unlock two new abilities. The player can also make tradeable versions of these codices to sell to others.

Anachronia came with several new additions to Hunter. While Hunting on Anachronia, players can earn Hunter marks to spend at Irwinsson's Hunter Mark Shop for rewards. Irwinsson is also the starting point for the Father and Son miniquest. In addition, if players find and return the Compass arrow to Irwinsson, they can complete the A New Direction achievement.

Players can also hunt previously-added creatures on Anachronia in a simpler manner than before. Butterflies such as Ruby harvests and Black warlock (Hunter)s can be continously caught and released by the player for AFK experience if being caught barehanded.

Players can also catch several jadinkos here without the need to build special habitats such as at Herblore Habitat. Common, Shadow, Igenous, Amphibious, Diseased, and Carrion jadinkos can all be found in areas around Anachronia, and can be caught with just a Marasamaw plant. In addition, the player can also catch Cannibal, Aquatic, Camouflaged, and Draconic jadinkos here, but will need to bring a Juju hunter potion to catch them (the required secondary ingredient to catch these jadinkos is at each habitat already). Hunting jadinkos can also give the player a chance at finding a jadinko to raise at the Player-owned farm.

There are other Hunting methods available as well. Players can find grenwalls north-east of the pavosaurus rex clearing or south-east of the scimitops clearing.Pawyas can be found in the south-western ruins. South of the pawyas, players can find yellow salamanders. Golden warblers can be found next to the Anachronia canyon mine (five spawns), or south of the Anachronia western ruins mine.

Big Game Hunter is a new method of training Hunter that players can start after reaching level 75 Hunter and level 55 Slayer. In several spots on Anachronia, dinosaurs can be found. In this activity, the player must bait and hunt these dinosaurs using boss-like mechanics, and being careful not to get caught. Hunting these dinosaurs can also give the player a chance at receiving a dinosaur for the Player-owned farm.

Laniakea is a new Slayer Master that can be found on Anachronia. Players can receive tasks from her if they have level 90 Slayer and 120 combat. Laniakea is the only Slayer Master that can assign cluster tasks, which are Slayer tasks of a category of monsters, allowing players greater freedom over which monster they want to kill. For example, she can assign to kill dragons, and the player can complete the task with whatever dragon they want. She also assigns a miniquest, Helping Laniakea, where the player must help her find a strong enough poison to help her protect the base camp against Anachronia's stronger monsters.

Dinosaurs and Vile blooms are also two new categories of high-level Slayer monsters featuring new mechanics, and they can be found spread out all over Anachronia. Slaying the dinosaurs can also give the player a chance at receiving a dinosaur for the Player-owned farm.

Herby Werby, a new Distraction & Diversion, can be played once every week. The player must aid Anachronia's ancient zygomites in destroying corrupted flora in their cavern. The player can earn Herblore and Firemaking experience, and earn several rewards, such as a bag that holds grimy herbs, two totem pieces, and a new pet.

Ranch Out of Time can be accessed through the mystical tree on the west coast of Anachronia.

Players can also find arbuck seeds exclusively on Anachronia. These can be used to grow arbuck herbs, which are used in several new potions, such as the Stamina potion, Extended super antifire potion, Aggroverload, and Powerburst of overkill.

Just as in Karamja, Anachronia has two overgrown idols which players can help clear at level 81 Woodcutting. Clearing the overgrowth will reward the player with a Totem of Navigation base and one of several different temporary Woodcutting boosts.

There are two new areas that players can fish at. They can cage, net, and harpoon fish north of the Ripper dinosaurs in the south-east of the island, or they can cage, harpoon, lure, and bait around the Spirit grove in the middle of the island.

Anachronia has an excavation site on the north side of the island that contains four material cache (orthenglass) nodes. Orthenglass is a level 20 Archaeology material.

Players can complete several achievements on Anachronia such as for building the base camp buildings. 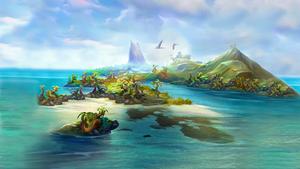 Anachronia was previously known as Fossil Island, also known as Kudos Island. Mentions of the island first appeared in the game after an update to Varrock Museum in 2007. The island was spoken of by the Museum's curator, Haig Halen, who mentions that reaching the yet-unexplored island is one of Varrock Museum's projects. A canal barge was under construction in the northern part of the Varrock Dig Site, overseen by the barge foreman, and claimed to be used to travel to the island via the River Salve. Obtaining 100 museum kudos was to be required to participate in the expedition.

Anachronia was developed by Mods Daze, Erator, and Ramen. It was QA'ed by Mods Cel and Shrew.[12] Mods BakingaZ and NicePants made the concept art. Mods Ian, Surma, and Slippers worked on the audio.[13]

Anachronia's release was promoted by the login screen by introducing a new background titled The Land Out of Time, and playing excerpts of the music tracks heard on the island: Untamed Horizons, On Safer Ground, Discover, Adagio for Anachronia, and Laniakea's Journey.

Event noticeboards could be used to teleport to The Stormbreaker in Varrock Dig Site, while royal messengers could be found at some of the lodestones, handing out royal messages and offering to take players to the boat.