From the RuneScape Wiki, the wiki for all things RuneScape
Jump to navigation Jump to search
This article is about the bosses. For the music track, see The Rex Matriarchs.

Rex Matriarchs in their lair.

The Rex Matriarchs are three powerful female rex dinosaurs that were enhanced by Kerapac. They are considered to be a spiritual successor of the Dagannoth Kings and share many similarities, but each dinosaur possesses unique mechanics and all of them are more resistant to attacks they are neutral to/strong against rather than being completely immune to it. The Rex Matriarchs are:

Orikalka, the Bagrada matriarch which attacks with melee and is weak to magic, specifically fire spells.

Rathis, the Corbicula matriarch which attacks with poisonous ranged attacks and is weak to melee, specifically stab.

Pthentraken, the Pavosaurus matriarch which attacks with magic and is weak to ranged, specifically arrows. 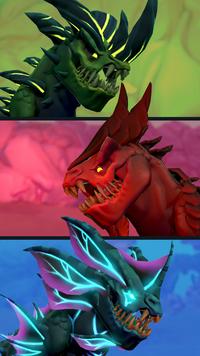 Rewards from defeating the matriarchs include hearts that can be used to upgrade Archers', Berserker, Seers', and Warrior rings into the Stalker, Reaver, Channeller, and Champion rings, each of which provide a special effect and some of the strongest bonuses for the ring slot. The matriarchs can also drop parts of Laniakea's spear, a halberd-range tier 82 weapon with the accuracy of a tier 75 weapon and damage of a tier 90 weapon, along with the boss pets Corbi, Bagra, and Pavo.

Completing the boss collection log for the Rex Matriarchs completes the Rex Flex feat and awards the title, [Name] the Ferocious.

Location of the teleportation device on Anachronia. 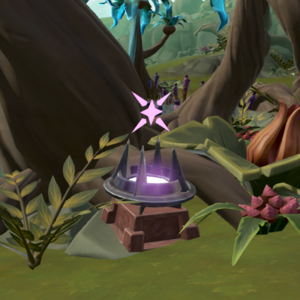 Activating the device teleports the player to the dungeon beneath Anachronia, containing the matriarchs.

After Raksha was captured and imprisoned by the Dragonkin, the Dactyl fledgling Kerapac was greatly intrigued by the Raksha's passive traits - namely, his poisonous spines, ice breath, and electrical discharge. Taking a trio of female rexes - one Bagrada, Corbicula, and Pavosaurus, he grafted each of the Raksha's traits into them. Rathis was given the poisonous traits, Pthentraken was given the electrical traits, and Orikalka the ice traits.[1][2]

The three matriarchs were the prototypes of what would eventually culminate as the present-day dragon race.

The rex matriarchs' potency was less than that of Raksha's, but Kerapac was content enough as he did not want to create a new threat for the Dragonkin.[3] They most likely shared a similar fate to Raksha when the island fell into disrepair. Similarly to Raksha, the rex matriarchs were drawn from a previous version of Anachronia when Kerapac re-created the island using the Needle in his attempt to stop the Elder Gods for good.

Only the unique rewards obtainable from the Matriarchs are listed here. For detailed information on the drops, check each Matriarch's article.

Each of the Matriarchs have a different drop table, however some drops are shared. 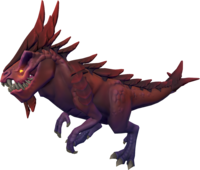 Orikalka's primary reward is the

Heart of the Warrior required to create the 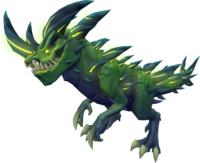 Rathis's primary reward is the

Heart of the Archer required to create the 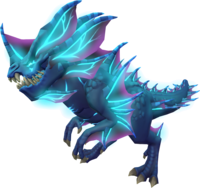 Pthentraken's primary reward is the

Heart of the Seer required to create the